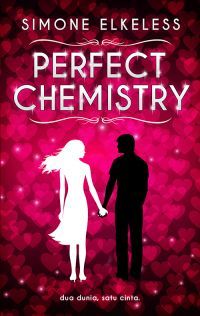 A fresh, urban twist on the classic tale of star-crossed lovers.

When Brittany Ellis walks into chemistry class on the first day of senior year, she has no clue that her carefully created ‘perfect’ life is about to unravel before her eyes. She’s forced to be lab partners with Alex Fuentes, a gang member from the other side of town, and he is about to threaten everything she’s worked so hard for: her flawless reputation, her relationship with her boyfriend, and the secret that her home life is anything but perfect.

Alex is a bad boy and he knows it. So when he makes a bet with his friends to lure Brittany into his life, he thinks nothing of it. But soon Alex realizes Brittany is a real person with real problems, and suddenly the bet he made in arrogance turns into something much more.

In a passionate story about looking beneath the surface, Simone Elkeles breaks through the stereotypes and barriers that threaten to keep Brittany and Alex apart.

First, let me tell you that I purely want to read this book because the name of the main character. Alex Fuentes. Like damn. I don‘t know why, I really imagine someone hot, like Enrique Iglesias hot. Plus that name sounds like trouble. So yeah. Honestly I don’t even read romance?? But that name really makes me want to read it.
So I bought it. And while it’s really cliche, I freaking like it. It’s really fast paced, with alternating point of views from Brittany and Alex. We got glimpse of their life, and their problem. From the first chapter, we all told that her “perfect” life is just an act. And from the first Alex’s chapter, we also know why he joined the gang and why he act like a jerk.
The whole starcrossed thing is also very predictable. Obviously, both Brittany and Alex background would be a problem. A rich, popular, captain of cheerleader white girl and troubled, mexican gang kid? C’mon. But seriously guys, it’s freaking addictive.
Alex Fuentes is our typical bad boy with good heart character. I think Brittany is a pretty weak character, she fell for Alex far too easily. Colin is a total loser. Seriously. Sierra and Paco are the type of bestfriend that I want to have for my own. Sierra doesn‘t trust Alex, but she tried to tell Brittany in a good way, and eventually try to accept Alex too. Same with Paco *sobs*. Darlene is like the typical fake bestfriend but actually want to take everything you have. Well, so much drama in this book.
Overall, and my first venture to the romance world, I think this book is really good. I never knew romance and drama could be this addictive. Plus, the author use some spanish words, and it really makes me want to learn spanish. I think this book would be perfect for people who love romance with a lot of drama.