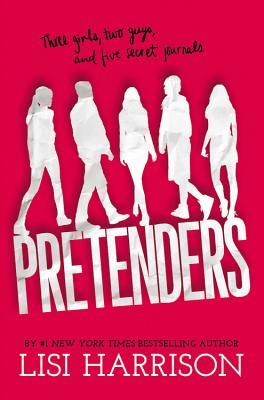 Three girls, two guys, five secret journals.
The five most popular students at Noble High have secrets to hide; secrets they wrote down in their journals. Now one of their own exposes the private entries…
I am leaking these because I’m tired and I know you are too. The success bar is too high and pretending has become the only way to reach it. Instagrams are filtered, Facebook profiles are embellished, photos are shopped, reality TV is scripted, body parts get upgraded like software, and even professional athletes are cheating. The things we believe in aren’t real. We are pretenders.

In the Engllish class, everyone is assigned to write a journal. The teacher promised that no one would ever read the journals, not even herself. But then, the journals of the Phoenix Five, the five most popular student at school were leaked. When the most private thoughts of five most popular students is leaked, no one is safe.
I don’t see why the Phoenix Five are called the Pretenders, because from what I’ve read in the journal, they don’t pretend to be anything unsual. They just trying to fit in and .survive high school. The characters are immature, when I read this book I imagine them as delusional 10-12 years olds.
The author has favorites, like Sheridan got many pages, and Jagger barely had 10 pages or so. We got everyone’s backstory except for Jagger’s. I couldn’t care enough for the characters.
The plot is really slow, I almost give up on this book. It’s just so boring and immature. But it picked up towards the end, like in the last 50 pages or so. But then… the author suddenly ends the book. And no, this is not a cliffhanger. At least when you get a cliffhanger, some problems had been solved. This book barely solves anything. Basically, nothing happens. You can’t end a book in a middle of the story, it gives no closure or whatsoever for the characters.
I haven’t read any of Lisi Harrison’s book, but based on my experience with this book, I won’t read any other books by her.

2 thoughts on “Book Review: The Pretenders by Lisi Harrison”