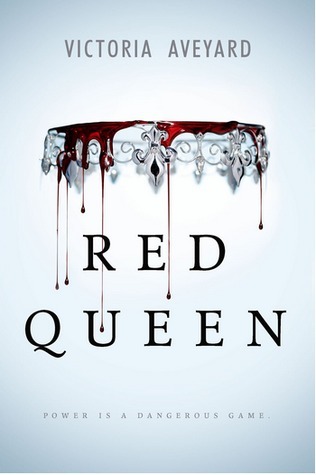 MARE BARROW’S WORLD IS DIVIDED BY BLOOD—those with red and those with silver. Mare and her family are lowly Reds, destined to serve the Silver elite whose supernatural abilities make them nearly gods. Mare steals what she can to help her family survive, but when her best friend is conscripted into the army she gambles everything to win his freedom. A twist of fate leads her to the royal palace itself, where, in front of the king and all his nobles, she discovers a power of her own—an ability she didn’t know she had. Except… her blood is Red.

To hide this impossibility, the king forces her into the role of a lost Silver princess and betroths her to one of his own sons. As mare is drawn further into the Silver world, she risks her new position to aid the Scarlet Guard—the leaders of a Red rebellion. Her actions put into motion a deadly and violent dance, pitting prince against prince—and Mare against her own heart.

This is the first book I’ve read in 2015. It’s been six months and I only remember bits and pieces about this book.But this book is one of the most hyped up and most anticipated release of 2015.
I remember the description about the world is pretty solid. I can remember the river, where the Reds live on the river bank and every year the Silvers would parade/flaunt their power and wealth while going through the river. I remember the palace being amazing (made of gold?) and the big arena in the middle.
Now, Red Queen has elements of dystopia novel. But it’s just feels so similar with other books.

Just basic elements of dystopian novels. BUT THEN.

The romance between Cal and Mare is insta-love and the chemistry is nonexsistent. They just fall in love without any reasons, and the love triangle is unecessary.
This book is just so similar with other dystopia books, so it feels like a mash up, instead of original series. I probably won’t bother to read the next book.

One thought on “Book Review: Red Queen by Victoria Aveyard”