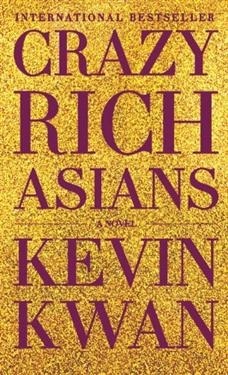 When American-born Rachel Chu agrees to spend the summer in Singapore with her boyfriend, Nicholas Young, she envisions a humble family home and quality time with the man she hopes to marry. But Nick has failed to provide a few key details. One, that his childhood home looks like a palace. Two, that he grew up riding in more private planes than cars. Three, that he just happens to be the country’s most eligible bachelor. On Nick’s arm, Rachel may as well have a target on her back the second she steps off the plane, and soon, her relaxed vacation turns into an obstacle course of old money, new money, nosy relatives, and scheming social climbers.

This is such a fun book! It’s like watching a reality show. People in this book are absolutely, unbelievably rich. It’s like the whole Asia economy depend on them. Which make all of them snobby and life an outrageously extravagant lifestyle. kind of like Keeping Up with the Kardarshian, but in  form of a book. We see all the glitz and glamours and the drama and all the expensive stuffs. It mentioned a lot of important people, descendant of some kings or Prime Minister of some countries, and it also mentioned a lot of expensive brands (honestly? 99% of the time I don’t even know what brand they’re talking about). But believe it or not, this kind of people are exist in the real life. And this book is an amazing satire for all crazy rich asians out there. If you look up news about chinese rich youth (a.k.a Fuerdai), you’ll find how outrageous their lifestyle is.

Nick is a great guy, but honestly, he didn’t even prepare Rachel for his family. Rachel is strong and down to earth, and she didn’t get carried away with all the money and the lifestyle. Most of the time, she doesn’t let the negativity get to her. Peik Lin, Astrid, Colin, Sophie and Araminta are such a nice and amazing friend, especially Astrid because we could see that she truly loves Michael. As for the other characters, they live up to the stereotype of typical rich people; all the girls are shallow and only care about money, the mothers only care about the “suitable match” for their children, and the fathers don’t really care about what happened at home.

The plot itself doesn’t only focuse on Nick and Rachel, but on other people around them, like Peik Lin, Astrid, Eleanor, and many more. The writing style is funny, and sometimes sarcastic. It also has Asian culture background, since the characters are mostly from China. And being half Chinese, I could understand most of the terms. AND THE FOOD. Guys seriously Asian food isn’t only Chinese food. You should try other types of Asian food, and this book describes the food in the most vivid and descriptive way! (Lucky me, there are a lot of nasi goreng and satay places near my house).

What make it doens’t work for me is just it’s kind of info dump-ish, because we’re introduced with so many characters with a lot of different important backgrounds, most of them own companies and property here and there. And I do think 400 pages are too long for this book, it feels draggy at some points.

Overall, this is such a fun and addictive book to read. Yes, it’s kind of info dump-ish because so many characters are introduced, but I still quite enjoyed it. It’s a hilarious satire to the crazy rich society out there.