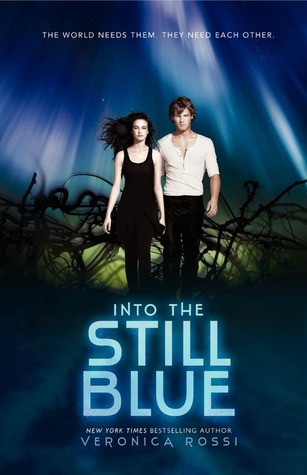 The race for survival comes to a thrilling close in the earth-shattering conclusion to Veronica Rossi’s New York Times bestselling Under the Never Sky trilogy.

Their love and their leadership have been tested. Now it’s time for Perry and Aria to unite the Dwellers and the Outsiders in one last desperate attempt to find the fabled Still Blue and bring balance to their world.

“She sank to her knees and lifted her head. She had become so accustomed to the rippling blue tides closing her in, pressing down on her, but this sky was open . . . this night was infinite. She felt like she might fall upward forever, drifting into space. Floating across the stars. Sable had spoken of embers scattered across the roof of the universe. It was a good description.”

Like Through the Ever Night, I also have conflicted feelings about this book. It started pretty well, with the Aether getting more often and worse, the Tides are stuck inside the cave. Meanwhile Cinder is still held captive by Sable and Hess, and the clock is ticking before they’re stuck forever because the Aether is getting worse. The race for the Still Blue has officially began.

Like all the previous books, this book also has fast-paced and action packed plot. There’s no rest for the characters. But they’re determined to beat Hess and Sable, retrieve Cinder and go to the Still Blue. The Dwellers and the Tides finally come together, realising that they want the same thing.

It’s just… the plot twist isn’t that strong for me. *spoiler Loran is Aria’s father? Where did that come from??? I just find it unbelieveable. I don’t even realize that it was suppose to be a major plot to the story. I don’t think Aria’s father is an important part to the story, but it was. *spoiler ends. I just find it irrelevant and not important for the story, so I don’t really care at all. And I was so pissed when they tried to save Cinder and *spoiler Roar turned back, and thus made all of them caught. And then they tried to escape but they keep failing! Someone always fail them! But it gives them time to bond. But it pissed me! *spoiler ends.

Let me just say: They did reach the Still Blue. But the price was too high. *spoiler Cinder??? He deserves happiness okay. He just feel like he’s a part of something, he just started to live. I keep hoping that he will survive, but nope. Veronica Rossi is just too cruel. And Hess’ death was too brutal, it wasn’t even necessary. *spoiler ends. And the ending. Was it really that easy to defeat Sable?

Overall, I think this book could be better. I just wished for something more, and it ends up anti-climatic for me. But I quite enjoyed it though, and if you liked Through the Ever Night then this book shouldn’t dissapoint you.

P.S: I’m really sorry about the excessive spoilers! But I really need to write them to prove my point! X

4 thoughts on “Book Review: Into the Still Blue by Veronica Rossi”