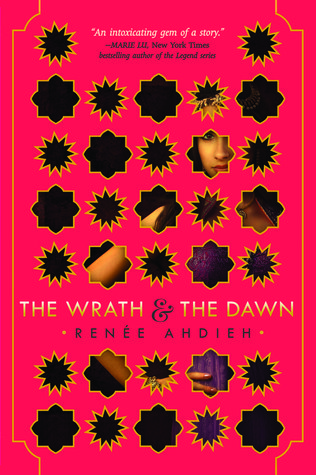 The Wrath and The Dawn
by Renee Adieh
E-book edition, 278 pages
Published in 2015, by G.P Putnam’s Son
✰✰✰✰✰

In a land ruled by a murderous boy-king, each dawn brings heartache to a new family. Khalid, the eighteen-year-old Caliph of Khorasan, is a monster. Each night he takes a new bride only to have a silk cord wrapped around her throat every morning. When sixteen-year-old Shahrzad’s dearest friend falls victim to Khalid, Shahrzad vows vengeance and volunteers to be his next bride. Shahrzad is determined not only to stay alive, but to end the caliph’s reign of terror once and for all.

Night after night, Shahrzad beguiles Khalid, weaving stories that enchant, ensuring her survival, though she knows each dawn could be her last. But something she never expected begins to happen: Khalid is nothing like what she’d imagined him to be. This monster is a boy with a tormented heart. Incredibly, Shahrzad finds herself falling in love. How is this possible? It’s an unforgivable betrayal. Still, Shahrzad has come to understand all is not as it seems in this palace of marble and stone. She resolves to uncover whatever secrets lurk and, despite her love, be ready to take Khalid’s life as retribution for the many lives he’s stolen. Can their love survive this world of stories and secrets?

Inspired by A Thousand and One Nights, The Wrath and the Dawn is a sumptuous and enthralling read from beginning to end.

Let me start by saying I SHOULD’VE READ THIS BOOK EARLIER. What was I thinking keep putting this book off for so long??? This book is so freaking fantastic.

The setting is just perfect. I keep thinking about Persian/Arabic culture when I read this. The way it was described was so vivid and detailed it was easy to imagined that I was in palace with Shahrzad. The palace, the jewels and the clothes are just so beautiful and intricated. And the food omg. I love Arabic food, and this book makes me craving for them!

“She will be your undoing.”

I love Shahrzad. Even though she doesn’t feel like 16, I love main characters like her. Instead of being the chosen one or the special snowflake, she chose to do the fight. She makes her own choices, try to keep fighting, and always plan her next move. She knows what to do instead of having the whole hero thing shoved at her. I just wish the romance is having more slower pace. It feels almost insta-love, but since they actually take such a long time to trust each other, I suppose it was pretty slow. I don’t know… I just wish it was slower. After only 2 nights, Khalid saved her and that’s make him not-so-cruel in my eyes… And then we have Tariq. I don’t hate him, I really don’t. He always tries his best to save Shahrzad. But here’s the thing: when a girl says no, she means no. I don’t know why authors keep creating love interest that thinks he knows the best for her. If she doesn’t want to be kissed, then don’t kiss her. In Shahrzad case: If she doesn’t want to be saved, she means she doesn’t need a savior. She has everything under control, she could do it. That’s my biggest problem with Tariq. He’s the typical “nope come with me he’s a monster how could you love him”. I know he means well, and he also know Shahrzad has everything under control, and yet he still dragged her away. Jalal was right. The girl should’ve have a say in the matter whether she wanted to be saved or not.
I wish we could explore more of the side characters. I’d like to know more of Jalal, Despina, General Al-Khoury and Rahim. Jalal seems like a nice, aloof kind of guy, but I don’t know why I didn’t ship him with Despina? Despina is such a strong and fierce girl, and I hate to read another case of “warrior turned damsel in distress”, especially not Despina. I just wanted to know more backstory of General Al-Khoury and Rahim. Who they family are, how could they become so respected and so on.

“What are you doing to me, you plague of a girl?” he whispered.
“If I’m a plague, then you should keep your distance, unless you plan on being destroyed.” The weapons still in her grasp, she shoved against his chest.
“No.” His hands dropped to her waist. “Destroy me.”

I can’t believe it took me so long to read this book! It’s just so amazing and feels magical and surreal. I’m really excited to read The Rose and The Dagger, to meet again with Khalid, Shahrzad, Jalal, the world, the food, the magic, literally EVERYTHING. If you haven’t read this, than I recommend you to read this book like NOW.

“There is no one I would rather see the sunrise with than you.”

And there’s no book I would rather read till sunrise other than this book!

29 thoughts on “Book Review: The Wrath and The Dawn by Renee Adieh”