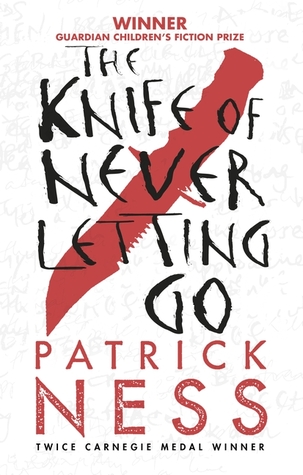 Imagine you’re the only boy in a town of men. And you can hear everything they think. And they can hear everything you think. Imagine you don’t fit in with their plans… Todd Hewitt is just one month away from the birthday that will make him a man. But his town has been keeping secrets from him. Secrets that are going to force him to run…The new edition of this unflinching novel about fear, flight and the terrifying path of self-discovery features the short story, The New World. Set before the events of The Knife of Never Letting Go, it is the story of Viola’s dramatic journey to the New World.

Oh boy. I think I started my Patrick Ness journey with the wrong book. I’m so not a fan of this book.

Writing style. The whole accent and weird words throw in made me confused at the beginning. It took a while for me to be okay with it and think of it as the accent. It took me much much longer to realize twixt means between. And no one tell me the writing style is like the Shatter Me series. We have a whole paragraphs with no punctuation describing and rambling, and words cut of just describing how the characters keep falling-

falling down the road or something. And also everytime the character learn something important the book would hide it and just write is as “and I see-
and I can’t believe it-

The characters. OH GOD. MY BIGGEST PET PEEVES ABOUT THIS BOOK IS OUR MAIN CHARACTER. TODD EFFING HEWITT. He’s just so self-centered and arrogant and just stupid really. His pride makes him achieve his mission slower and his stupidity and inability to kill is basically the reason all the shits are happening to him. If only he admits he couldn’t read and ask for Viola’s help. Or just warn the people. Things would be so much simpler. And everytime Viola try to tell him the right thing, he won’t listen. And he’s able to kill an innocent person but can’t kill the ones that done him wrong the most?? I think his stubbornness and hesitation really fits his character, since he’s only 13 years old. But really? Does he have to piss me off so much? I’ve read other MG novels and none of the characters pissed me off as much as Todd Hewitt did.

Viola is more mature and honestly more interesting to read. I don’t know how old she is, but she sounds older than 13. I admit, sometimes she’s a bit pushy and act like a know-it all. But at least she listens when someone tried to give advice. I read the extras from her pov and I really liked it.
Manchee. Oh God my poor precious. For me, if dogs could talk, they would be like Manchee. The way he talks and acts and thinks really feel like real dog. Ness really nailed it with him. Which is why he broke my heart and I literally had to close the book for a moment to calm down. I don’t know what kind of dog Manchee is, but I always imagined him as a corgi.

So as you can see, I didn’t enjoy this book. WHYYYYY. I won’t be continuing with this series, but I would like to know if other Ness’ books {A Monster’s Call, More than This, The Rest of Us Just Live Here} have similar writing style or not? I really really want to give this author another chance so please let me know!

15 thoughts on “Book Review: The Knife of Never Letting Go by Patrick Ness”