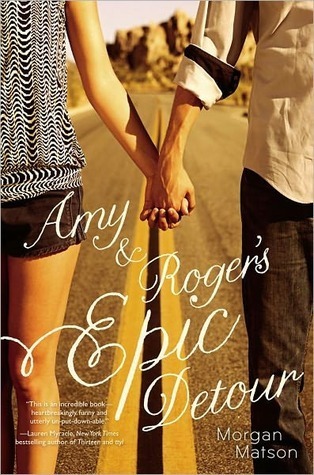 Amy Curry thinks her life sucks. Her mom decides to move from California to Connecticut to start anew–just in time for Amy’s senior year. Her dad recently died in a car accident. So Amy embarks on a road trip to escape from it all, driving cross-country from the home she’s always known toward her new life. Joining Amy on the road trip is Roger, the son of Amy’s mother’s old friend. Amy hasn’t seen him in years, and she is less than thrilled to be driving across the country with a guy she barely knows. So she’s surprised to find that she is developing a crush on him. At the same time, she’s coming to terms with her father’s death and how to put her own life back together after the accident.

Morgan Matson is quickly rising as one of my favorite contemporary author. I’ve read 3 of her books- Second Chance Summer (which is one of my all time favorite, the amount of tears I cried is just too much), Since You’ve Been Gone, and this one. I enjoyed them all, but this one is my second favorite of all I’ve read, which really surprises me because I had a slow start.

The story begins with Amy being all alone in the house, talking to her mom preparing for the impending road trip that will take her to her new house in Connecticut, and with it, her new life where her family isn’t torn apart by grief. There’s only a small problem though- Roger, a childhood friend she doesn’t even remember will be joining her on the trip, and he was arriving as she was on the phone. Amy already dreaded this trip enough, but now with being stuck with not-so-stranger, she dreaded it even more. Can Amy survive the trip and make it to Connecticut safely?

I absolutely love how Morgan Matson able to create such a fluffy contemporary while handling important topic such as grief and family. The way it is written here (and Second Chance Summer) was very realistic and really struck a chord with me. People handle grief differently, even when they are losing the same person, and it was potrayed in this book.

I really enjoyed the characters, but I feel like I didn’t know them enough. For Amy, it is because her whole being is swallowed by grief and guilt, they are all she is most of the time. We got glimpses of her in Before, but it didn’t prove much other than she’s a typical teenagers. I love how close she is with her father though, they share so many memories and similarities, and her father genuinely felt (not seems, but feels) like an amazing guys. For Rogers, it is because this book is from Amy’s pov, and in the course of 4 days of this book, there’s only so much she could know about Roger. But from what I’ve seen, Roger seems like a nice, amazing guy, and definitely someone I’d love to have a roadtrip with. Along the way, they met some people, mostly Roger’s friend, and they are seems nice. I really wish we got to see them more in another of Matson’s book. As a main character maybe?

The plot and writing flows really well, and the pacing was amazing. I love how it took me on the road trip– this book does not only talk about the tourist attraction, but also about the long interstate road, the small towns they cross, and the people they met. My only complaint are only because it felt that the story dragged a bit in the middle, and I feel like the romance progress too quickly. And I  understand it, being trapped for days on a road trip crossing America with the same person might caused you to develop feelings for them. However, it rubbed me the wrong way since Amy did take an impulsive decision with Michael, and Roger does not deserve to be ghosted again.

Amy and Roger’s Epic Detour took me by surprise. It was a fun and fluffy read, but it manages to tackle a heavy topic too. Despite the dragging parts in the middle, I really enjoyed crossing the USA with Amy and Roger. I’ll definitely be reading the rest of Morgan Matson’s books!