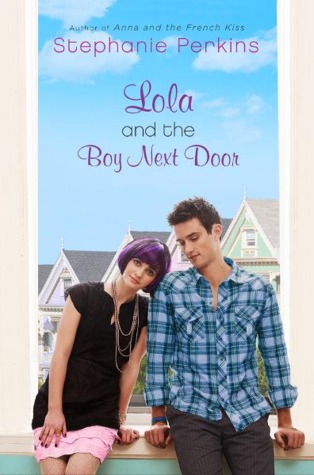 Lola and the Boy Next Door

In this companion novel to “Anna and the French Kiss,” two teens discover that true love may be closer than they think

Budding designer Lola Nolan doesn’t believe in fashion . . . she believes in costume. The more expressive the outfit – more sparkly, more fun, more wild – the better. But even though Lola’s style is outrageous, she’s a devoted daughter and friend with some big plans for the future. And everything is pretty perfect (right down to her hot rocker boyfriend) until the dreaded Bell twins, Calliope and Cricket, return to the neighborhood.

When Cricket – a gifted inventor – steps out from his twin sister’s shadow and back into Lola’s life, she must finally reconcile a lifetime of feelings for the boy next door.

I am so conflicted with this book. Just like Anna and the French Kiss, I wanted to love this book, and I do have some fond feelings towards it. However, there are too many negatives for me to overlook them.

Let’s start with the positive. Lola and the Boy Next Door successfuly gave me that warm, fuzzy feelings I associated with AATFK. No matter how pissed I am at Lola, when the cutesy scene comes, they still give me that fuzzy feelings. I also really love Cricket Bell. He’s that adorable, kind, and quiet guy at school you can’t help to like and slowly fall in love with without you realizing it. Compared to St. Clair, I prefer Cricket more. St. Clair is more outgoing and fun, which is why I want him as guy-best friend but Cricket is someone I want to be with. I also think the romance is really cute, childhood friends turned couple is definitely one of my favorite troupe and while it has its problems, the feels is there. There’s no doubt that Stephanie Perkins can write fluffy contemporary and likeable guy, but I can’t say the same about the main characters and plot.

I really can’t stand Lola. If you think Anna is bad, Lola is definitely worse. She’s immature, spoiled, and selfish. She’s going back and forth between Max and Cricket, lies about Cricket from the beginning towards Max, which obviously, made Max jealous. She knew it, yet she keep hanging out with Cricket, lies to Max about it, and stringing them along the way. She ignores everyone advice and thinks she know the best, yet when shit hits the fan, she blames everyone but herself. Sure, Max reaction are bad but Lola honey, you provoke him to. Also, her line of thoughts are so dramatic.

Because that’s the thing about depression. When I feel it deeply, I don’t want to let it go. It becomes a comfort. I want to cloak myself under its heavy weight and breathe it into my lungs. I want to nurture it, grow it, cultivate it. It’s mine. I want to check out with it, drift asleep wrapped in its arms and not wake up for a long, long time.

Look, I’m not discrediting people with depression if that quote above describe you accurately, but in the context of Lola and what I read about her for like 200 pages, what she experienced at that time is not depression. It’s sadness, it’s hurt, but also denial that she caused all of that shitstorm which is why she doesn’t want to let go of it all. She is just so immature and felt so young. I mean, she literally broke a dish when she found out the Bells were moving back, but when you know the root of her hurt, it’s so unimportant it felt comical. In a way, by painting her feelings as depression (while she’s only overreacting sadness), it trivializes and disrespect people with depression. Also, Her passion is costume designing, but I don’t get how is she allowed to wear those crazy costumes by her parents and school. I mean, a wig and a dress made of bedsheets to school? Doesn’t her school has dresscode or something? She’s not 17, she’s 14.

This is where I get personal. I’m not defending Max, he’s an angry guy and said mean things, but as someone who’s been in his position, I can’t help not to be in his side. 5 or 6 years different is not huge, the only thing that make it huge is the notion that “oh my god you’re in school and he’s already in college” or “oh my god you’re in college and he’s already working” but once you guys are in the working world, age doesn’t matter so why does it matter so much when you’re still in school? I’m not saying that pedophile is okay, but Max already say no to Lola, she’s the one who went after him no matter how hard he refuses, yet EVERYONE is blaming Max. He’s a 22-yo guy who has to endure weekly brunch with Lola’s parents and hourly phone check out, the judgement of her bestfriend, and walking around with a girl in costume, yet Lola wonders why he felt like he obligated to go to the brunch (BECAUSE HE HAD TO OR YOUR PARENTS WON’T LET YOU OUT HONEY), or why he doesn’t like Lindsey. Lola also lied about Cricket the first time Max asked about her new neighbors, she only tells Max about Cricket when Max caught them together, and she kept hanging out with Cricket, without telling Max. How can you expect Max to not being angry and feeling distrust towards her?

I had been in Max position and trust me, it did not feel good and it brought back a lot of unpleasant memories.

Also, I’m not saying that teenagers should date adults, but if they are nice and responsible and just feel right, why not? My parents have a pretty big age difference and they have been happily married for decades.

Back to the review, let’s talk about the plot. What’s up with this series and cheating? First it’s Etienne cheating from Ellie, then it’s Lola cheating from Max. Ellie because she was busy with her education, Max because he was away doing shows. I’ve seen a lot of this theme around in movies and books where someone is excused to cheat because their couple is not there, busy with their career and education, so I need to ask this, is it really bad to have someone who have their own ambition, that you have to cheat on them? Because it happened to me too and seeing it around made me wonder if it’s really a bad thing.

And I’m not saying Cricket is free from the blame, he made his advances too even though he knew Lola has a boyfriend, but everytime he pulls away Lola always did something to chase after him so… ¯\_(ツ)_/¯

Overall, Lola and the Boy Next Door is a cute fluffy contemporary perfect for fan of childhood best-friends turned couple. However, the main character is really immature and the plot and theme it justified really annoys me that I couldn’t give it a higher rating.

What do you think of this book? Also, should I read the third book (Isla and the Happily Ever After) or just let this series go?