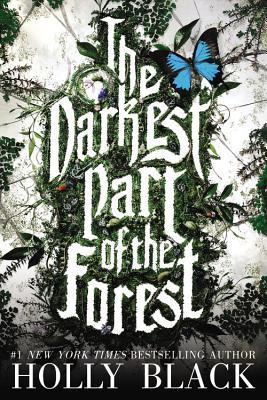 The Darkest Part of the Forest

“Children can have a cruel, absolute sense of justice. Children can kill a monster and feel quite proud of themselves. A girl can look at her brother and believe they’re destined to be a knight and a bard who battle evil. She can believe she’s found the thing she’s been made for.”

“Hazel lives with her brother, Ben, in the strange town of Fairfold where humans and fae exist side by side. The faeries’ seemingly harmless magic attracts tourists, but Hazel knows how dangerous they can be, and she knows how to stop them. Or she did, once.

At the center of it all, there is a glass coffin in the woods. It rests right on the ground and in it sleeps a boy with horns on his head and ears as pointy as knives. Hazel and Ben were both in love with him as children. The boy has slept there for generations, never waking.

Until one day, he does…

As the world turns upside down and a hero is needed to save them all, Hazel tries to remember her years spent pretending to be a knight. But swept up in new love, shifting loyalties, and the fresh sting of betrayal, will it be enough?

I’ve been wanting to read this book for the longest time. I am a huge fan to faeries in YA books and we haven’t got enough of them. I’ve heard amazing things about Holly Black’s faery element and I can’t wait to stop reading them. With the release of THE CRUEL PRINCE, the hype became even more pronounced. Everyone is singing their praises to the newest release but I really want to read THE DARKEST PART (from now on will be TDPOTF) as I heard some mention of this book being connected. It took me a while for me to read this book, but when I’m done, I am conflicted of how I felt about this book.

This book is very weird, and I meant it as a compliment. The town of Fairfold lies next to a deep woods where it is a common knowledge that the fair folk dwell there. As the result, there was an uneasy trust where the feys never hurt anyone there, but the citizens of Fairfold also use various knicknacks to protect themselves from the feys. They are not surprised if some poor unfortunate tourist got into “accidents” and in fact, act indifferent towards them. The whole thing was very weird but also interesting, and I really enjoyed reading the every day mundane life of the citizens felt like they are not-so normal.

The atmosphere fits perfectly with the weirdness of the setting. The story, the forest, and the fairfolk are portrayed as these inhuman, dark and twisted things, but we also feel intrigued by them. Why did they formed the truce? What happened to the Horned Boy in the glass coffin and who is he? The whole court felt like typical faerie stories, with the hunt and revel and fey drinks, but the fey aspect outside the court is what makes it interesting. Throughout the book, we also got the sense of eerieness and something wicked creeping on the sidelines. The plot and the questions came out as the story unravels also adds more to the atmosphere and overall, it was extremely statisfying.

Unfortunately, the characters are where this book lost its charm for me. Our main character, Hazel, is a shield maiden. She’s the one capable with swords while her brother Ben uses his music to protect them. While I admire her courage and understand where her insecurities come from, I can’t stand her kissing boys things. All she thinks about 90% of the book is about kissing and it really distracts the story because it’s just an unecessary reminder how she can’t stop kissing everyone she met and I’d rather focus on the story thanks. Not to mention she’s very self centered. Despite her thinking she’s doing things for others, in the end she did all those things to fulfill her own agenda, which is to cover her insecurities.

The rest of the characters felt underdeveloped. Ben is Hazel’s musically gifted brother but we don’t see much of him in the story. Severin is intriguing, but also underdeveloped. So was Carter and Jack, the not-so sibling because one of them is a changeling. Which is a shame really, because they are 100000% more interesting than Hazel. I think this is due to the short length of the book, it spend so many pages establishing the world and Hazel’s status that it doesn’t have a chance to develop other characters. There are two villains in this book and while the first one is very developed, the other is not.

The romances in this book are okay. I love Severin and Ben, I think they are adorable together, but not so much with Hazel and Jack. Maybe because I am biased with my dislike with Hazel, but I do not feel the chemistry between them. And even though I enjoyed the first romance, I do not particularly care for them. I feel like they can be removed from the book and the story will remains the same.

The ending felt anticlimatic, the fight and the conflict resolution has enough build up but was resolved too quickly. Again, this is due to the length of the book, but after spending 3/4 part of the book building it up, the final 1/4 part consists of the climax and resolution of the story. As the result, the final fight was anticlimatic and unclear what happened there.

Overall? Some part of the book exceeded my expectations. I love the weirdness and the sense of unease, as well as the eerieness we feel throughout the series. However, I really wish the author adds something new to the faerie folklore and the characters more interesting instead of being one dimensional. Holly Black has proven herself able to write an intriguing story about feys though, so I’m definitely going to read THE CRUEL PRINCE and TITHE.