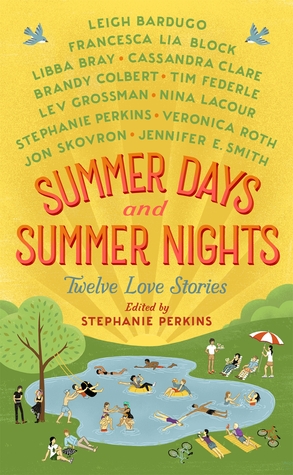 Maybe it’s the long, lazy days, or maybe it’s the heat making everyone a little bit crazy. Whatever the reason, summer is the perfect time for love to bloom.

Summer Days & Summer Nights: Twelve Love Stories, written by twelve bestselling young adult writers and edited by the international bestselling Stephanie Perkins, will have you dreaming of sunset strolls by the lake. So set out your beach chair and grab your sunglasses. You have twelve reasons this summer to soak up the sun and fall in love.

What a great start for the collection! The story centers around few summers where a girl saw a sea monster and in the process of looking for it, befriend a nerd. And yeah, over the course of summers they ended up falling in love. I expected this to be a fantasy since it’s Leigh Bardugo and it absolutely didn’t disappoint, she always managed to blend cute romance and fantastical plot together. I’m not sure on the ending though.

Flora is having a hard time so she decided to sign-up for geometry class during the summer, even though she aced the class. What she didn’t expect is an old crush and her friends also joining the class. I love the writing and the imagery the author brings to the story, and Flora felt very relateable. But at the same time, the whole thing was unmemorable and just “there”.

03. Last Night at the Cinegore by Libba Bray ☀

On the very last day of Cinegore, the cinema screens the only copy of a cursed movie, only to find out the curse is very real and everyone has to fight for their life. While the concept sounds really epic, the actual story was very meh to me. It felt ridiculous, the characters are not my favorite, and overall I just didn’t enjoy it.

This one took me by surprised since it was hard to get into at first. Using initials, this story follows our main character and her girlfriends visiting their local club. They always meet with this other group of guys, until one day they interact and sparks flew for our main character. I didn’t really enjoy the setting and the use of initial, but I love the undertone of the story and its theme.

This is a continuation of North and Marigold story from the previous anthology, one that I didn’t remember about so I think that decrease my enjoyment of the story. As I read, I found myself remembering more details and I think the couple is totally adorable. But that’s it, this is a bittersweet, adorable story, and nothing more.

Matty and Kieth work in the same amusement park for the summer and on the last day of work, they made a pact to break up. I didn’t really enjoy Kieth, but their romance captures ~summer love~ in its essence. I love how close Matty is to his mother and how he’s not afraid to be himself.

I thought I was done with futuristic/dystopian set for a while, so I was pretty skeptical going into this story. In the future, the setting has already developed a technology called Last Visitation which allows us to get into dying people’s memory and talk with them for the last time. I knew this story was going to be sad before I read it, but it still managed to punch me with feels. It was so heartfelt and just really really good, I don’t mind reading a whole book on this premise.

This is, without a doubt, my favorite story from this book. I always love it when I read book and the narrator breaks the fourth wall and address me. The story sets in a summer resort where visitors and employees alike are woe-ing over the state of their romance. The narrator has a hilarious voice, like Jane the Virgin narrator, if you ever watched the show. The story is also pretty hilarious with plenty of botched matchmaking and shenanigans!

Another lackluster one. Our main character is struggling over the fact that the cousin she views as her mother is moving away with her girlfriend, and ended up blaming said girlfriend. I get why she’s torn between feeling happy and feeling abandoned that she became cranky, but still it didn’t make it easier to read. And while the romance is pretty sweet, I think they are moving too fast as they just discussed some hard stuff beforehand.

I didn’t expect much from this story as it’s been a while since I never read anything by Cassie outside of the shadowhunter world, but I’m pretty intrigued with the whole dark circus thingy. I would say that the setting and mystery surrounding the circus were pretty well executed, but as the reviewer pointed out, why does her romance always have to be related and have that “forbidden” factor? And I just don’t think the characters have many depth.

Our main character is working in a summer daycare and struggles to get close with a kid who’s on the spectrum. She’s also having a crush on someone she rarely talks too, because he seemed to be distant with her. I really enjoyed this one, I think the love interest is portrayed really well and the romance is pretty sweet. I love how main character always try her best, she’s taking her job seriously and genuinely interested in her job. It’s refreshing since in other books I read, everyone seems to be hating and dissing their summer job. And the ending is sooo cute!

12. The Map of Tiny Perfect Things by Lev Grossman 🌧

I felt unfair for DNF-ing this story after a couple of pages and I knew I probably was being unfair, but I was so done with this book. I already know what rating I will give to this book and no matter how much I enjoyed this story, I would not change it. So yeah, I DNF it and moved on to another book.

Overall? This story collection failed to impress me. Most of the story was forgettable and it didn’t give me any summer-y feelings. I think the lack of variety is what makes them blurred together, I would love to see a non-romance story in this collection or maybe set during a holiday in a foreign country or on a cruise, as there are so many things you can do in the summer. I get that it actually says “twelve love stories” but love does not come in one shape only, you know. So yeah, that was what happened and I ended up with only a few memorable stories.