A hero’s tournament. A defiant contender. Does one girl have the courage to take on Mount Olympus?

Hope’s world doesn’t have room for heroes. She barely has time for schoolwork, swim team, and taking care of her ailing mother. But when she’s invited to a mysterious tournament, the all-powerful hosts won’t take no for an answer.

Transported to Mount Olympus, Hope comes face to face with her new trainers—the pantheon of Greek gods. While other contenders train hard to gain a fighting edge, Hope searches for a way out. Instead, she finds a gorgeous shadow god who may just convince her to stay…

As each round unfolds, the ultimate prize draws closer—the granting of her heart’s deepest desire. If she survives the final challenge, her mother’s cure would be within reach…but only if Hope can ignore the tournament’s dark purpose.

If I read this years ago during the height of YA paranormal, I would rate it higher. Now? This book turned from a 3.5 read to a 1.5 star read quickly.

I really enjoyed Hope, she felt realistic to me. If I were in position, I would try everything to get back to my mother’s safely, especially since no one explained to her how does the tournament works and what happened on earth while they were gone. Then she turned all her determination to come home into the competition and try her best to survive, for her mother’s sake. But despite wanting to win, she also has compassion and would help other challengers to safety.

That is, until Kieron enters. Up until this point, I’m sure I have hope of giving this book higher than 3 stars. Then, it turned into your typical YA paranormal and a popular mash-up. All the originality went down the drain. After that I just skimmed the rest of the book because I am curious about the quest and they are my favorite parts. I am also interested in Hope will handle losing Amy and Gabriel, since they are super tight but again, only one can win. And those scenes did not disappoint, especially when Hope lost Amy.

I may have enjoyed this book for the first 20% or so, but then it went downhill really fast. The protagonist is likeable, but the romance is not for me and this book felt unoriginal, like a mash-up of popular YA books.

The Good Demon by Jimmy Cajoleas 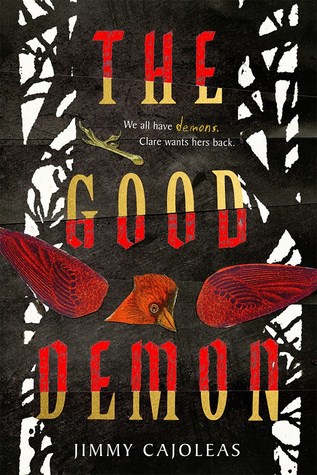 Clare has been miserable since her exorcism. The preacher that rid her of evil didn’t understand that her demon—simply known as Her—was like a sister to Clare. Now, Clare will do almost anything to get Her back. After a chance encounter with the son of the preacher who exorcised her, Clare goes on an adventure through the dark underbelly of her small Southern town, discovering its deep-seated occult roots. As she searches for Her, she must question the fine lines between good and evil, love and hate, and religion and free will. Vivid and sharp, The Good Demon tells the unusual story of friendship amid dark Gothic horror.

This…. was a strange book, in a bad way. I always love sleepy, small town setting, but the setting in this book just didn’t work for me. It felt like being trapped in a sauna, and that’s be best description I could think of.

The story was hard to get into until 48% and by then I think it was kinda too late for me to change my opinion. It was not creepy at all, and the main characters really annoyed me. The female main character, Clare, was so pretentious and bitter. I could understand the bitterness considering the life she had and the more I read, but the pretentiousness is a quality I never found attractive to me. The male main character,  Roy was very naive and gullible. Again, it’s understanding considering the life he had, but it’s frustrating too. The whole town felt like they live in this big bubble and each family lives in small bubbles, it’s driving me crazy.

I quite enjoyed the reveal though, about Her, the Wish House, and the town they live in. I just think the build up could be better and the ending wasn’t so rushed, I feel like the ending wasn’t tied really well.

The Forgotten Guide to Happiness by Sophie Jenkins 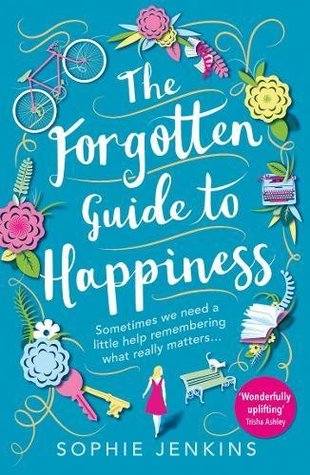 Sometimes, happiness can be found where you least expect it…

Twenty-eight-year-old Lana Green has never been good at making friends. She’s perfectly happy to be left alone with her books. Or at least, that’s what she tells herself.

Nancy Ellis Hall was once a celebrated writer. Now eighty, she lives alone in her North London house, and thinks she’s doing just fine. But dementia is loosening Nancy’s grip on the world.

When Lana and Nancy become unconventional house mates, their lives will change in ways they never expected. But can an unusual friendship rescue two women who don’t realise they need to be saved?

An irresistible story of love, memory and the power of friendship that readers of The Keeper of Lost Things and The Lidowill adore.

Reading the synopsis, this book seems like a heartwarming story of a woman who’s finding inspiration and friendship from an old woman, right?

Wrong. This book is none of those things. The main protagonist, Lana, is one of the weakest I’ve ever read. She’s bland, self-centered and doesn’t care about Nancy at all. She always thinks of Nancy as this famous author, source of information and a person to learn to, which is her main motivation to cohabitate with her, instead of thinking of her as a person. And when that doesn’t work, she reads her journal, trying to find juicy bits of her scandalous marriage for her book inspiration. And in the middle of this, there’s Nancy’s step son. At its core, this book is a romance between Lana and said step-son, with Nancy being used as an excuse for them to spend time together. And in the end, Lana doesn’t feel like she has any growth at all, she still unlikable and bland.

The plot never really picked up and grab my attention either. It felt all over the place and the pacing was really flat. I don’t know the meaning of the title either, since there’s no guide in the story for happiness, either for Nancy or Lana. What grates on my nerves more is definitely that misleading synopsis! Ugh.

The Phantom Tree by Nicola Cornick

“My name is Mary Seymour and I am the daughter of one queen and the niece of another.”

Browsing antiques shops in Wiltshire, Alison Bannister stumbles across a delicate old portrait – supposedly of Anne Boleyn. Except Alison knows better… The woman is Mary Seymour, the daughter of Katherine Parr who was taken to Wolf Hall in 1557 as an unwanted orphan and presumed dead after going missing as a child.

The painting is more than just a beautiful object from Alison’s past – it holds the key to her future, unlocking the mystery surrounding Mary’s disappearance, and the enigma of Alison’s son.

But Alison’s quest soon takes a dark and foreboding turn, as a meeting place called the Phantom Tree harbors secrets in its shadows…

I’m so sad I didn’t enjoy this book. I always love anything Tudor related so when I saw this book about a forgotten Tudor that was barely mentioned in the history, I jumped on the chance to review it.

It’s not the plot or the characters per se, I think the writer is fantastic and perfect for the era, the plot is intriguing and the characters are likable. However, it’s down to the way the story is told. We jumped right in the middle of the story, where our MC Allison was staggering in the modern road, being confused and shocked. I thought it’s because she just arrived to our world, but then she also made mentions of her work in other countries, her past fling, and so on. So who is she and what happened to her??? I even googled whether it’s the second book or something but nope, this is a standalone. From there on, we traveled back to the past. Now, the past is pretty straightforward but every time we got back to the present, it’s the same old confusion of what was happening and who is this girl.

I might get back to this book in the future but now, I dnf-ed it at 27%

7 thoughts on “Mini reviews #11: Another series of unfortunate reads”