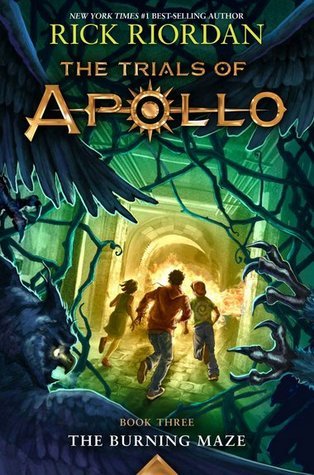 Published May 1st, 2018 by Disney Hyperion

The formerly glorious god Apollo, cast down to earth in punishment by Zeus, is now an awkward mortal teenager named Lester Papadopoulos. In order to regain his place on Mount Olympus, Lester must restore five Oracles that have gone dark. But he has to achieve this impossible task without having any godly powers and while being duty-bound to a confounding young daughter of Demeter named Meg. Thanks a lot, Dad.

With the help of some demigod friends, Lester managed to survive his first two trials, one at Camp Half-Blood, and one in Indianapolis, where Meg received the Dark Prophecy. The words she uttered while seated on the Throne of Memory revealed that an evil triumvirate of Roman emperors plans to attack Camp Jupiter. While Leo flies ahead on Festus to warn the Roman camp, Lester and Meg must go through the Labyrinth to find the third emperor—and an Oracle who speaks in word puzzles—somewhere in the American Southwest. There is one glimmer of hope in the gloom-filled prophecy: The cloven guide alone the way does know. They will have a satyr companion, and Meg knows just who to call upon. . . .

The story starts off soon after we left Apollo and Meg in the previous book, with them now exploring the maze and has to dodge many wild fires. We started the action early with our heroes had to fight for their lives in the first chapter.

I would say that was a good start, but then the pacing slows down after that. From the moment they emerged from the maze to when they met their helpers, it got pretty boring that I’m tempted to give up. However, Apollo’s sense of sarcasm and the action that happened afterwards really made me glad I’m stuck with this book through the end.

Apollo is still the same old Apollo: he’s self centered, narcissist, and sarcastic af. But we also sense the changes happened to him up until this point: his willingness to sacrificed himself for others, his nervousness, his fears, his pain, and his appreciation of human. We could see beneath his “I AM GOD” facade and I hope we continue to see this in the next installments!

Meg is still Meg, but we got to know her better also in this book. We visited Meg’s roots and learned how she tied up with all of this Triumvirate stuff. Not to mention the bond she made with Apollo and the others are flourishing in this book and Meg is actually… nicer (???) to Apollo.

As many of you may already know, there is one MAJOR death in this book. This person is not exactly my favorite character, I’m fairly neutral about them, so I thought I could handle it. Well, I was wrong and their death hit me hard. And then the reactions of the others. I’m still in denial that this person actually died, they have been through so much like UGH.

There is also another death that sort of hit me harder than aforementioned death, but it’s because I smell it miles away and still couldn’t do anything to stop it *sobs*

Despite the slow pacing at the beginning, I would say The Burning Maze is a pretty good book in this series. It’s definitely better than The Dark Prophecy: the humor is back but we also got a lot of honest and insightful moments with the characters. I’m pretty sure the next book will features Frank, Hazel, and Reyna as they are the only characters from the series that haven’t appear, so I’m really looking forward for that!

15 thoughts on “The Burning Maze by Rick Riordan”