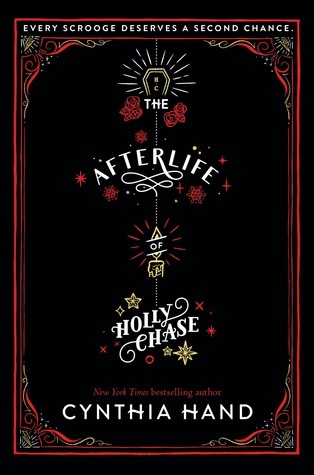 The Afterlife of Holly Chase

On Christmas Eve five years ago, Holly was visited by three ghosts who showed her how selfish and spoiled she’d become. They tried to convince her to mend her ways.

And then she died.

Now she’s stuck working for the top-secret company Project Scrooge–as the latest Ghost of Christmas Past.

Every year, they save another miserly grouch. Every year, Holly stays frozen at seventeen while her family and friends go on living without her. So far, Holly’s afterlife has been miserable.

But this year, everything is about to change. . . .

Well well, this is an unexpected surprise!

I love Cynthia Hand’s Unearthly, despite reading it after the YA paranormal boom, the story and the characters still felt solid to me. She has released couple books afterwards, but I never have the time to pick it up. With the christmas season rolling around, I decided to read something festive and this one fits really well, especially since I know I enjoyed the author’s previous series.

This book is a clever retelling of the Christmas Carol by Charles Dickens. If you don’t know the story, it’s basically about an old man called Ebenezer Scrooge who’s mean and bitter at life, but especially at christmas. On the christmas eve, he was visited by 3 ghosts: Christmas Past, Present, and Future, and ended up changing his life afterwards. It’s a super popular classic and the term Scrooge is basically synonymous with Grinch now.

Anyways, why is this book is such a clever retelling? Cynthia Hand managed to bring the story to the modern world. In this story, our main character Holly is a failed Scrooge. As in, she didn’t change her life after the ghosts visit. She died soon and forced to work at Project Scrooge that manages the “Christmas Carol production” every year to help Scrooges. It blends the core of the story, the modern feel of 21st century, office politics, and teenage drama seamlessly, it’s super enjoyable.

I suddenly realized I was doing what exactly every single girl in the history of the human race would have killed to do right after meeting a cute guy- I was looking inside his mind and finding out exactly what he’d been thinking at the time.

Yes, I did mention teenage drama. As this book set during christmas and is a YA, you can expect to read some cheesy but romantic romance. At first it was super selfish of Holly, but then as the romance blossoms, she developed deeper understanding and as readers, shipping them is inevitable 😍

I love each and every characters, even out main Scrooge, Holly. She’s meant to be an unlikeable character, and on the exterior, she does. As we explore her story, what she did was very bratty, but we do feel for her. Does it justifies her behaviour? It doesn’t. But it makes us readers root for her to see the error of her ways, especially since it’s not on her but more on influence. I love other characters in Project Scrooge too, and the ending kinda hurt me.

What brings down the rating for me is not the book’s fault, but mine as I was in a reading slump when I first started reading. It took me a while to get through the first chapters, but I totally flew through the rest of the book. It’s a fast paced, clever retelling of Christmas Carol, with some sweet romance and character development, so what’s not to love? If you’re looking for some reads for next christmas, you should add this to your TBR 💙