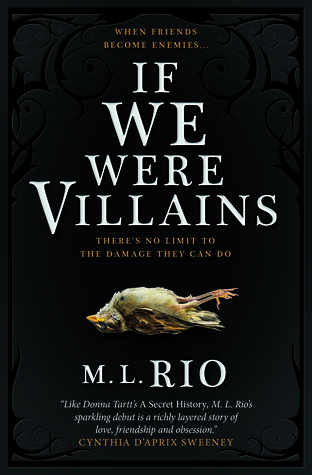 If We Were Villains

Oliver Marks has just served ten years for a murder he may or may not have committed. On the day of his release, he is greeted by the detective who put him in prison. Detective Colborne is retiring, and he wants to know what really happened a decade before.

As a young actor at an elite conservatory, Oliver noticed that his talented classmates seem to play the same characters onstage and off – villain, hero, temptress – though he was always a supporting role. But when the teachers change the casting, a good-natured rivalry turns ugly, and the plays spill dangerously over into real life.

When tragedy strikes, one of the seven friends is found dead. The rest face their greatest acting challenge yet: convincing the police, and themselves, that they are blameless…

If We Were Villains is one of those hyped up books about anti-heroes (aside from The Secret History and Vicious) that I’ve seen again and again on my timeline. It’s also been staring at me a lot from its shelf in the bookstore, so I caved and bought it. Despite having been spoiled of the ending and who actually did it in general, it still managed to blew me away.

I honestly have no idea how to review this book as every time I think about it, I lost the ability to form coherent ideas, so here’s a quick list of the things I liked and not from the book.

Overall? This book took tragedy to a whole new level. Like, this whole book is a tragedy, it breaks my heart. It’s so atmospheric, complex, and full of emotions. It’s perfect for the colder months and completely warmed my cold dead heart. It’s just…. perfection, even talking about it gives me feels. It may not be for everyone, but it’s one of the highlights of my reading year!

As per recommendation from one goodreads user, go read what is woven into the lives of others by helloearthlings – it’s the ending we all deprived of!

12 thoughts on “If We Were Villains by M.L Rio”