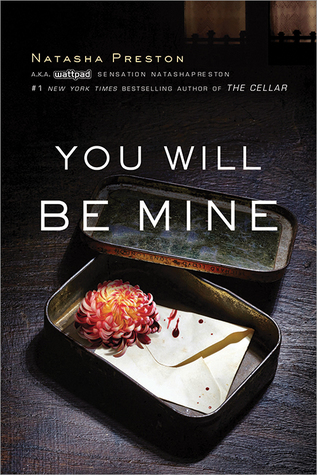 You Will Be Mine

Lylah and her friends can’t wait to spend a night out together. Partying is the perfect way to let loose from the stress of life and school, and Lylah hopes that hitting the dance floor with Chace, her best friend, will bring them closer together. She’s been crushing on him since they met. If only he thought of her the same way…

The girls are touching up their makeup and the guys are sliding on their coats when the doorbell rings. No one is there. An envelope sits on the doormat. It’s an anonymous note addressed to their friend Sonny. A secret admirer? Maybe. They all laugh it off.

Except Sonny never comes home. And a new note arrives:

In the days leading up to Valentine’s Day this year, Lylah and her group of friends received a letter that seemed as a prank at first. They ignored it of course, but things escalated quickly and with each body count, they have to deduce who did the gruesome crime before the killer claimed the next victim.

If there is a novelization of a famous teenage slasher movie like Saw or Valentine, this book would be it. The writing is just so easy to get through, it describes the events and the feelings about them cleanly without need of purple prose, yet they still do the work and did not make the book felt like missing something. The plot is really fast paced, over the course of a few days, the killer strike repeatedly in a gruesome manner so there will always this sense of thrill and anticipation of who’s going to be next.

Speaking about gruesome killings, this book definitely has some. The description is not really explicit, but it’s enough to get me squirming. Not to mention the circumstances of each body’s finding and the cruel ways the killer taunt them, it really adds to the stress and fear level of this book. The reveal was a bit anticlimatic for me as I already guessed it, but the explanation really delves to the psychology of them really well!

This book centers around Lylah and her 6 friends, written from her first perspective. Since this book is pretty short and the writing style is succinct, I felt like we only get to know Lylah deeply. I may be annoyed with her name (who doesn’t), but I can’t deny that her character is quite likable. Her parents death two years ago on Valentine’s day sent her into a lowest point of her life, so it’s understandable that she tried to avoid the festivities of the holidays. Added to that, the stress of her friends’ murders nearly sent her to another downward spiral. But she’s determined to stay with her friends and keep herself together before the killer is caught, she did not want to be treated as an invalid, and she tried did not let killers nor crushes get in a way of her self development. I found her loyalty and determination are admirable, not to mention she did not rash and never tried to be the hero by running head first into trouble. Even though she know she was at the center of the killings, she never go without consulting her friends and the police in the first place.

Now for the bad things, I found the dialogue is very cliche and juvenile. I admit, near the 75% mark of the book, I skipped a lot of conversations as I found them redundant and uninteresting. Also, I think we could benefit more glimpses into the investigations, such as some questioning scenes and discussion among themselves. It felt really glosses over. And finally, I can’t believe how incompetent the institutions are in this book- it’s to the point of being unbelievable! How come the campus is not closed already, when there were 3 students murdered? And not only that, they still held Valentine’s party! How can the killer snuck into the house so many times, even though there were police stationed outside? This was never addressed and the issue only explained with one death in the end. Not to mention how the police seemed to be stuck at one suspect immediately without further evidence or other investigations. It’s infuriating.

You Will be Mine is a fast-paced, easy, and thrilling read for those of you who want a different kind of valentine read. While it has some flaws, it was enjoyable and I flew through this book really quickly! If you love teen slasher movie, this book is perfect for you.