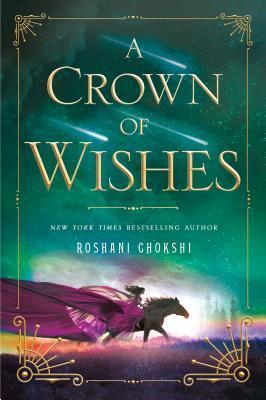 A Crown of Wishes

She is the princess of Bharata–captured by her kingdom’s enemies, a prisoner of war. Now that she faces a future of exile and scorn, Gauri has nothing left to lose. But should she trust Vikram, the notoriously cunning prince of a neighboring land? He promises her freedom in exchange for her battle prowess. Together, they can team up and win the Tournament of Wishes, a competition held in a mythical city where the Lord of Wealth promises a wish to the victor.

It seems like a foolproof plan–until Gauri and Vikram arrive at the tournament and find that danger takes on new shapes: poisonous courtesans, mischievous story birds, a feast of fears, and twisted fairy revels. New trials will test their devotion, strength and wits at every turn. But what Gauri and Vikram will soon discover is that there’s nothing more dangerous than what they most desire.

Adventure, passion, and vibrant storytelling, A Crown of Wishes is a story you won’t soon forget!

It’s been quite a while since I read The Star-Touched Queen and joined Maya on her journey, yet I can still vividly recall the settings, wonders, as well as the story of Maya and Amar. While it is mainly because it met all my expectations of “hapsione retelling with indian culture”, it is also in-part due to the writing of the book. There’s no denying that Roshani Chokshi has way with words that will envelope you and leave you wanting for more. So yeah, I was really excited then A Crown of Wishes was announced, but it took me years before I finally got to it.

A Crown of Wishes follows the story of Gauri, Maya’s sister who we saw last stuck in Baratha under her cruel brother’s reign. In this book, we learned that she has became a prisoner, mentally and physically. She was forced to play deadly political game at every turn and as the result, develop a harsh demeanor and always thinks of the worst to protect herself. Another key player in this book is Vikram, the little boy Maya saw and saved in the tapestry. He indeed has became a great prince and warrior, relying more on words rather than brute. Yet the fact that he is not the king’s legitimate child weigh on his future as he desperately wanted to be seen for his potential rather be a puppet king. Together, they teamed up to win a wish in the mysterious Tournament of Wishes against other Gods and mythological creatures.

A story. This was the key to immortality. The things that made kings quiver and deities distrustful: Nothing but a tale.

As a book that centers around the characters’ desire to win a wish, there’s a note of wistfulness in this book that grew into a bright hopefulness as the story goes. This change in the book’s tone is gradual, but conveyed beautifully as we follow them. But this is not a sad book; Gauri and Vikram might spend their time wishing for many things, but they are determined and cunning and would do anything to win their wish. The balance between hard determination and the longing are written really well in this book.

Honestly, Roshani Chokshi’s writing is one of the best in YA. It was beautiful without being overbearing, the word choices are just right without beating around the bush and crossing into the purple prose territory. In this book, the writing done a fantastic job in world building. From the vibrant night’s bazaar to barren dessert, and finally, to the magical kingdom of Kubera where the competition took place. We met a lot of mythological creatures, but they were so much more than creatures of the stories. Each of them are unique and fun to read about.

Character-wise, A Crown of Wishes really dive deep into the characterization. As I mentioned, we stood by the characters in their highest, lowest, and all the moments in-between. Each scenes are developed very well and we spend time to connect with the characters. Most of the time, we spend our time relieving the characters’ worst fears and past so we can sympathize with them. But as the story goes, we also experienced the characters growth and understand all the underlying reasons. Gauri is not hell-bent on taking the throne by force anymore, while Vikram found peace and reassurance he needed.

“He turned to me, mischief glinting in his eyes. “How do they celebrate good fortune in Bharata? In Ujijain, we kiss.”
“Look elsewhere.”
“Are you sure? You spend an awful amount of time looking at my
lips.”
“That’s only because I’m horrified at the sheer idiocy of the words
leaping out of them.”

Last but not least, in fact this is my favorite part of this book, is the fun banter between Vikram and Gauri! I knew a lot of people that loves this banter, but it is something you have to read by yourself to judge. The banter, which started out as their defence mechanism, became a way for them to connect and eventually, flirt. I know I just complained about the amount of banter in my King of Scars review, but in A Crown of Wishes, each shots fired gives a purpose.  Whether it is to hide pain and fears, fight about how to approach the challenge, questioning ideological values, and flirting with each other, this is not an aimless banter that gets tiring after a while.

Just like The Star-Touched Queen, A Crown of Wishes has lyrical writing that make the story seemed magical and whimsical. But this book is more superior in terms of the characters, who leaped to life from the pages with all their hopes, dreams, love, and insecurities. We joined them in the magical revels and we also stood by them while they relieved their biggest fears. Captivating from start to finish, A Crown of Wishes has earned the spot on my top books of 2019 💖