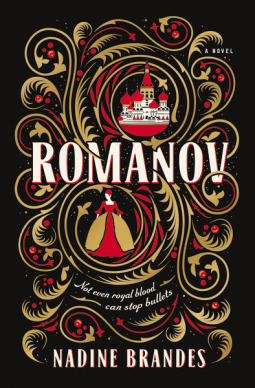 The history books say I died.

They don’t know the half of it.

Anastasia “Nastya” Romanov was given a single mission: to smuggle an ancient spell into her suitcase on her way to exile in Siberia. It might be her family’s only salvation. But the leader of the Bolshevik army is after them . . . and he’s hunted Romanov before.

Nastya’s only chances of survival are to either release the spell, and deal with the consequences, or enlist help from Zash, the handsome soldier who doesn’t act like the average Bolshevik. Nastya’s never dabbled in magic before, but it doesn’t frighten her as much as her growing attraction for Zash. She likes him. She thinks he might even like her . . .

As one of the imperial families, the tragic story of the Romanovs continues to intrigues and captures the attention of many, more than a century after it happened. With a lot of historical accuracies in terms of characterizations and events prior to the execution, Romanovs is an interesting way to tell the story to the world. However, as a fiction, with its slow pacing, lack of magic, rushed romance, and underdeveloped romance, this book fails to meet my expectations. The lack of context and knowledge around the issue might also create misunderstanding and reduce the enjoyment of other readers. Overall, this book didn’t meet my expectations but it might still work for others.

13 thoughts on “Romanov by Nadine Brandes // Might work as non-fiction, but not as fiction”