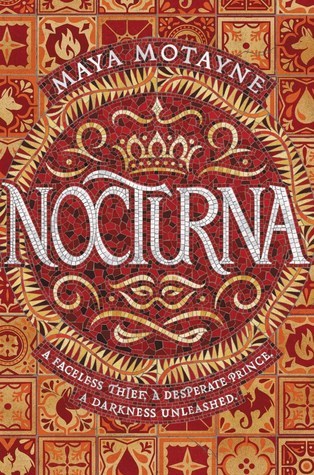 The first in a sweeping and epic own voices debut fantasy trilogy—set in a stunning Latinx-inspired world—about a face-changing thief and a risk-taking prince who must team up to defeat a powerful evil they accidentally unleashed. Perfect for fans of Tomi Adeyemi, Leigh Bardugo, and V. E. Schwab.

To Finn Voy, magic is two things: a knife to hold under the chin of anyone who crosses her…and a disguise she shrugs on as easily as others pull on cloaks.

As a talented faceshifter, it’s been years since Finn has seen her own face, and that’s exactly how she likes it. But when Finn gets caught by a powerful mobster, she’s forced into an impossible mission: steal a legendary treasure from Castallan’s royal palace or be stripped of her magic forever.

After the murder of his older brother, Prince Alfehr is first in line for the Castallan throne. But Alfie can’t help but feel that he will never live up to his brother’s legacy. Riddled with grief, Alfie is obsessed with finding a way to bring his brother back, even if it means dabbling in forbidden magic.

But when Finn and Alfie’s fates collide, they accidentally unlock a terrible, ancient power—which, if not contained, will devour the world. And with Castallan’s fate in their hands, Alfie and Finn must race to vanquish what they have unleashed, even if it means facing the deepest darkness in their pasts.

I received an e-ARC of this book from Edelweiss Plus and Netgalley in exchange for an honest review.

It seems like my last few reads haven’t been higher than 2 stars. While I can blame it on the reading slump, upon introspection I realized that it’s mostly because those books are really underwhelming for me. Sadly, Nocturna is no exception to this latest reading trends.

Pitched as a fantasy set in a latinx world, I am excited to immerse myself in the vibrant latinx-inspired world the story set in. While people complained that there wasn’t enough latinx aspect and it is indistinguishable from other worlds, I feel like I have to disagree. I’m not a latinx person so I’m not the best person to talk about the representation, but I really enjoyed the world here. The obvious one is yes, the magic used spanish words instead of english one. But there are other more subtle aspects that readers may not realize, such the fearsome sandals threat by mothers™ and talks of colonialism. It is obvious that Castallan and Englassen are inspired by the real story of English conquest and its impact on the country- the first one that come to mind is the Aztecs. In this story, colonialism caused the country to lose so much of themselves as their language and culture are forcibly erased. Not only these efforts remove their identity as a country, this is also done to erase their connection their magic. Even after the uprising that caused them to take back their country, Castallan still struggle to find the old connection and in some aspects, still try to mimic the Englassen customs. As someone’s who’s country was under occupation for a long time, I can totally relate with the experience Castallan went through and what’s left afterwards.

Magic had a language, and bruxos were taught that certain words led to certain results, but if you were truly fluent in magic, the use of the language didn’t have to be strict.

However, that’s where my enjoyment ends. Soon as I started reading, I felt like something doesn’t sit well with me. As I continue reading, I realized what it was: the book was too similar with Shades of Magic series. While I’m fine with authors taking inspiration with each other, Nocturna felt like it was crossing an invisible line. Our main characters, Finn, Alfie and Luka are basically Lila, Kell, and Rhy. The magic system are a bit different, but the basis of words and how Alfie’s magic works is similar with Kell. The villain is also a black smoke that possess others. I’ve only read book 1 in Shades of Magic series and I DNF this book halfway so I don’t know how much the similarities will go, but a quick scroll through the review reveal that the ending is similar, and there will be magical tournament in later books. Sounds familiar?

Moreover, the characters are really immature and lack of any complexities. The latter one might be because I’ve seen them in other series and they have the exact characterization as well as motivations. Alfie is the heir to the crown and yet insisting on solving the problem himself because he was scared he will disappoint his parents. Instead of asking for a help of someone who actually knew what they were doing, he asked Finn, the thief who has her power tied. The thing is, none of the characters have any qualifications or training in magic sufficient to defeat the villain and they act in such an immature way throughout the story, it baffles me.

“Why do you enjoy making people feel small?”

“Don’t kid yourself,” she said, challenge written in every line of her face. “I didn’t make you small; you were small to begin with.”

Like the source material, of course Finn got to be a sassy and spunky character to show that she is a Strong Female Character™. I’m so tired of seeing women have to be portrayed as sassy and resist all the rules™ in order to be viewed as a strong character. Give me someone who rely on their femininity, their minds and their feelings instead of talking back and running headfirst into danger. Of course this spunky attitude generates banter with Alfie (of course) but the thing is, they are not witty. Instead, they are frustrating to read and actually hurtful for both parties.

And finally, I felt like the story is too long. Maybe because I already know the source material, that I was bored through the majority of the book. Maybe because I didn’t enjoy the characters and felt disconnected with story. Whatever the cause is, the plot felt contrived and convoluted, that at 53% mark I just decided to give up.

At first, it was refreshing to see a fantasy book set in a latinx world which have such a vibrant culture to being with. But as I continue reading, the negatives began to pile up and outweigh the positives. Nocturna has glaringly obvious similarities with Shades of Magic series, that hits too close to home and made me uncomfortable to read it. The characters aren’t enjoyable to read either due to their immature behavior and hurtful banter. The story itself felt too long; without any originality, it’s hard for me to stay invested with the story. Ultimately, Nocturna has a lot of potential but it failed to live up to any of it- except the world building.

16 thoughts on “Nocturna by Maya Motayne // So much potential, but lacks originality”