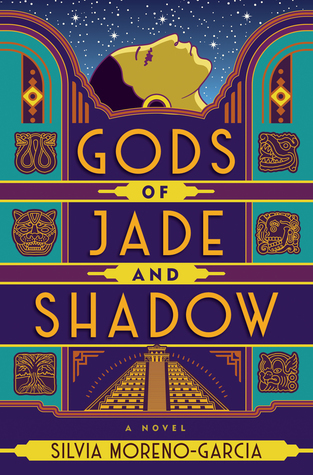 Gods of Jade and Shadow

The Mayan God of Death sends a young woman on a harrowing, life-changing journey in this dark fairy tale inspired by Mexican folklore, for readers of The Song of Achilles and Uprooted.

Here we shall begin to tell a story: a tale of a throne lost, of monsters and magic. A tale of gods and of the shadow realm. But this, our story, it begins in our world, in the land of mortals.

The Jazz Age is in full swing, but Casiopea Tun is too busy cleaning the floors of her wealthy grandfather’s house to listen to any fast tunes. Nevertheless, she dreams of a life far from her dusty, small town in southern Mexico. A life she can call her own.

Yet this new life seems as distant as the stars, until the day she finds a curious wooden box in her grandfather’s room. She opens it–and accidentally frees the spirit of the Mayan God of Death, who requests her help in recovering his throne from his treacherous brother. Failure will mean Casiopea’s demise, but success could make her dreams come true.

In the company of the strangely alluring god and armed with her wits, Casiopea begins an adventure that will take her on a cross-country odyssey, from the jungles of Yucatán to the bright lights of Mexico City–and deep into the darkness of the Mayan underworld.

Mixing the excitement of the Roaring Twenties with Prehispanic mythology, Gods of Jade and Shadow is a vivid, wildly imaginative historical fantasy.

I received an e-ARC of this book through Netgalley in exchange for an honest review.

*I think they meant Native Americans? It’s written as Indian and not explained what the word actually referred to. As an Asian, my thoughts immediately go to Indian, but due to the place and time setting of the story, I think it refers to Native Americans. Correction and suggestions are appreciated!

If you’ve been following me for a some time, you know I always love history. This extends to my love towards mythology, which is why I love reading stories/retellings about them. While I’ll always love Greek and Roman mythology, I’d love to read stories about lesser known deities. One of the first mythology I’m actually exposed to was the from the Mayan mythology due to their notorious human sacrifices. Yet I never actually learn deeper about the mythology nor the civilization due to the complexities of the system and the religion. Sets during the roaring 20s (a time period that I never really like tbh), Gods of Jade and Shadow seemed like a perfect book to learn more about the mythology and religion of the Mayans.

Some people are born under lucky star, while others have their misfortune telegraphed by the position of the planets.

Unfortunately, this book fell flat for me. Despite the lyrical writing, the biggest issue is actually also on the writing. This book use the all-knowing 3rd pov, which initially made this book felt like we’re reading some epic- which I loved. But as the book progressed, it’s actually very “tell not show”. Each chapter begins with paragraphs upon paragraphs of description on the places they traveled to city and the Mayan civilization, which is a lot of information to process. Not only we are told what our characters were seeing, we are also told on how they are feelings. As the result, I didn’t feel connected to the characters nor to the story.

Which is a shame, really, because other elements in this book are actually great. The world-building is very detailed; whether it’s the mortal realm with all its changes and impact from colonization, to the terrifying darkness and lush magical landscape of Xibalba. The mythology, despite only got a fraction of the stories within the Popoh Vul, are interesting as it describes the relationship of the Mayans and their gods, as well as how they perceive things. A minor complaint that each guardian of the essence are defeated to easily, it’s like Vucub-Kame actually wants Hun-Kame to succeed…

Casiopea (this spelling of her name really bugs me, but I digress) is our main character of this story. Her life has been marred with injustice and misfortune, thus she yearned for the time she’ll eventually be free and explore the world. Which is why, when she accidentally freed Hun-Kame, she agreed to accompany him on his quest. She has the typical build of “strong female heroine”: adventurous and feisty, but she also felt fear and uncertainty. Because she has been living her whole life under different rules and because she realizes she’s out of her depth here, playing the game of the Gods. As the result, she can also be quiet and observant. Her mortality also becomes her strength rather than her weakness, she provides different perspective to problems they faced and erode Hun-Kame immortality.

I can’t say much on Hun-Kame, Vucub-Kame, and other creatures she met along the way as they are the product of the mythology. And Hun-Kame mortality is the product his connection and journey with Casiopea, so there’s not much to comment there either.

If you think that something might happened between Hun-Kame and Casiopea, you are absolutely right. While I usually shipped forbidden romance like crazy, it doesn’t really work for me here. Yes, there are moments that made me ache, but for most of the time, I just didn’t feel the connection. Maybe because the time frame was too short, or maybe because we’re being told on what they are feelings all the time, instead of letting us see/feel by ourselves. Either way, I felt this is also a weak point of the story. At least the ending made sense though.

All in all, while this book has lush world building, interesting mythology, and well-developed characters, the writing style is very telling instead of showing. It’s very info dump-y and takes a way the connection I might otherwise felt to the characters and stories. This in turn makes me felt uninvested with the romance and the quest as a whole as I am told on how am I supposed to feel & see, rather than being shown what happened. If you’re looking for a mythology story with different deities and unique setting, this book might be sufficient for you.