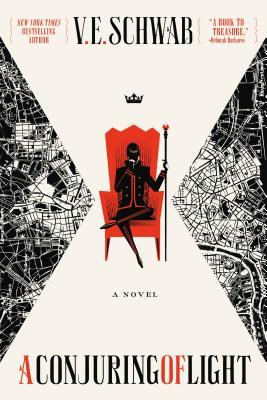 A Conjuring of Light

As darkness sweeps the Maresh Empire, the once precarious balance of power among the four Londons has reached its breaking point.

In the wake of tragedy, Kell–once assumed to be the last surviving Antari–begins to waver under the pressure of competing loyalties. Lila Bard, once a commonplace–but never common–thief, has survived and flourished through a series of magical trials. But now she must learn to control the magic, before it bleeds her dry.

An ancient enemy returns to claim a city while a fallen hero tries to save a kingdom in decay. Meanwhile, the disgraced Captain Alucard Emery of the Night Spire collects his crew, attempting a race against time to acquire the impossible.

Can you hear that? That’s the sound of my heart breaking and me keening like a wounded animal.

ACoL picks up directly where AGoS left us off, with Lila trying to find and rescue Kell before it’s too late for Red London. It dumps us straight to the action and while the stakes are high, we also know that she will probably succeed because how else we’re going to get 600ish of story without our main character?? Anyways, while this book can be categorized as non-stop action from start to finish, it also have some kind of lull in several places where instead of fight scenes, they are scheming and battling with their wits. And while I usually hate this kind of storytelling (I’m too impatient for this 🙈) I actually enjoyed how it’s used to delved deeper into all the characters!

Personally, I think the characters are the star of this series. Sure, the premise of the world is amazing: four parallel Londons with touched in a different ways by magic. Unfortunately, I don’t think it’s explored enough. The whole arc mainly sets in Red London, but I still feel like I didn’t get a firm grasp of the world. Grey London sets as our own magic-less London, meaning there are other countries in Grey London’s world. But what about in other London? In Red London, we know that there are 3 other kingdoms yet not all of them are touched by magic. Why is this happening? Why only Red London then? What does that mean for other countries located in Black and White London, where magic destroyed the Londons? Does that mean it also destroyed the other countries? Or is it limited to the Londons? ACoL explored a bit more of the world of Red London, with pirates and floating markets, but not enough to expand the world as a whole.

Right, now back to the characters. Let’s start with Kell, our main character and the one who started all this. Sadly, I never felt much for him. Sure, I care for him in a way because other characters care for him and his loyalty for the Maresh is a complex issue. But other than that, I always find his development overshadowed by other characters– like he’s nothing without his loyalty for the Maresh, his relationship with Lila, and his connection with Holland.

This pattern is repeated in this book, where the main issue is to save Rhy and in extension, save the Red London. In order to save them though, he has to be willing to overcome his feelings against Maxim and Emira, as well as Holland. He always felt a kind of kinship with Holland but in this book, he had to acknowledge that the similarities may be more than the fact that they are the last Antari, but also the responsibilities and prisons they had to endure. We also got to see more of his relationship with Lila, of how much they cared for and tempered each other. Both Lila and Kell showed a side of them only to each other and it’s really adorable in the middle of all the carnage and chaos going on ❤

Lila, who despite our rocky start, has wormed her way into my heart. I finally realized my issue with Lila is not her character per se, but how the author write her character. It’s like being repeatedly shoved into my face how ruthless and amazing Lila is, how badass she is, how cunning and how smart and how………..

I get it. She’s awesome. Can we move on?

Moments that made me fell for Lila is her moments of vulnerabilities and emotions. The one in second book who found herself unable to walk away because she found a home aboard the Night Spire. The one who learned magic every night. Who would follow Alucard to death and save Kell whatever it takes. In this book, we got plenty of these moments. This moments usually surfaces whenever she’s with Kell or Alucard as they are the people she’s most comfortable with, but it is evident it extends more than them.

Rhy, who has the most visible growth compared to other characters in the series. In the first book, he’s this charming prince who’s hiding an immense insecurity due to his inability to wield magic. This led to the events in ADSoM and the binding of Kell to him. And while Kell will always be loyal to him, this binding means a physical and emotional prison for both of them as seen in AGoS. In ACoL, Rhy was put in a difficult position but he stepped up flawlessly to the role and responsibilities required of him. He managed to see his “condition” and Kell’s sacrifice as a strength for him instead of a weakness. And while I never doubt his love for his kingdom, the Rhy in book 1 would not be able to shoulder the immense loss and responsibilities book 3 Rhy endured in this book.

While I really enjoyed Alucard, he still felt like a side-character instead of a main in this book. We got to see more of how much he loved Rhy, what he would sacrifice for him as well as his family. But I feel like that’s just it? I guess it’s just he’s being overshadowed by the other 4 main characters.

And now, welcome to the part where I made an in depth analysis as well as screaming incoherently about Holland.

It’s no secret that I love villains, antiheroes, and everything in between. Holland Vosjk is one of the most complex and tragic characters I’ve ever read about and one that initially kept my interest in continuing this series.

In this book, we got so much more background on Holland. On who he were, what happened to him, what got him into the binding in the first place. What was he thinking, why he did what he did, and so on. In a way, this book is Holland’s redemption arc. And Schwab managed to redeem him; he may be unapologetic and fueled by rage for what Red London did to White London, but he also took responsibility for what he did. All he want to do was to restore White London, to use the power he has for some good, and he won’t sit by let another world being destroyed. He gave his everything and it’s clear that other characters also see this, from the way they have this grudging respect for him.

{SPOILER!!!! highlight to view, also some spoiler for King of Scars by Leigh Bardugo}

bUT ALSO screw Schwab for killing him the way she did. Holland Vosjk died alone and hopeless, without anyone to comfort him and the feeling of failure for failing to save his London. He never knew that he IS the Someday King, that he did it, he restored magic to White London. He died in sadness, yearning for Vortalis but also the people that tried to kill him because that’s how lonely he was. It was bittersweet, because Holland did found his peace, but he never knew that he was enough and it’s a form of cruelty to my poor heart.

I wish Schwab will bring him back in the new Shades of Magic trilogy, pull a Bardugo and bring Holland back.

So yeah, I cried like a baby, had a book hangover followed by a reading slump because I’m not over him.

Schwab also allocate enough pages for us to get attached and care for the side characters such as Emira, Maxim, Hastra, and Tieren which is an incredible feat comparing how packed the plot and characters development are in this book. Aside from the amazing fighting scenes, this book also have a high death toll so the emotional swings were very high for me.

Despite not really liking the first book, Shades of Magic series redeemed itself with two amazing sequels. I found the world building a bit lacking as it didn’t expand more from what’s introduced in the first book, but the plot is engaging and full with twist and turns. Furthermore, the series is filled with complex, well-developed characters and best redemption story I’ve ever read in a long time. It’s definitely worth the hype and time, and I’m not ready to let this series go just yet.

9 thoughts on “A Conjuring of Light by V.E Schwab // A really long post because everyone’s dying and so am I”