I skipped August edition as I didn’t watch anything in the month of August, however, I did watched a lot of stuff in September. So grab your popcorns and let’s see what I’ve been watching in September 2019!

Good Omens is one of my most anticipated release of 2019. I love a good shenanigans, stories about uncanny enemies working together and of course, angels and demons. Obviously Good Omens have all of those and I’m super excited that I even bought the book!

Unfortunately, it didn’t really live up to the hype- both book and series. I find the narrative is very rambly and the humor is very dry; then again, british humor rarely suits me. This is what makes me really hard to care for any of the characters, I barely paid attention! That’s except for Crowley and Aziraphale, though!

I mean, anyone who read the book or watch the series would definitely fall in love with this ineffable, chaotic duo! They might seem like such opposites, but they are actually really similar in respect that they both love humans and would do anything for them. Aziraphale seems to be the more powerful from the both of them, but Crowley is the one doing more magic and tbh, I wish we got more magic here!

I’d say that I did have a good time while watching the show and definitely had some good laugh here and there. However, it was disappointing because it didn’t capture me fully even though I was so sure it would be a new favorite 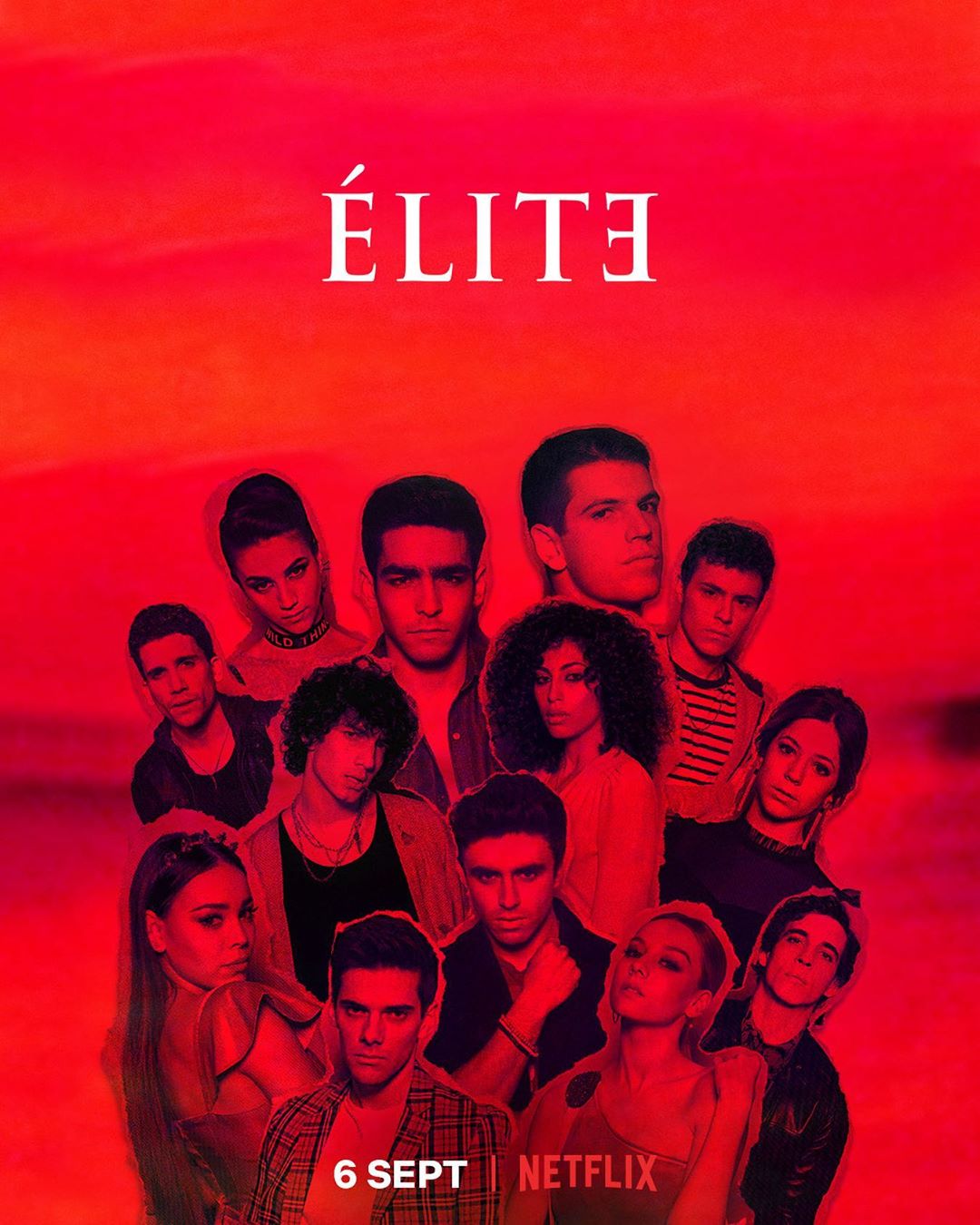 Other than Good Omens, Elite is my most-anticipated release this year. For those of you who’s not familiar, Elite is like the spanish version of Gossip Girl, but with more sex, drugs, and murder mystery. But it’s also give more complexities with the plot and character development and didn’t shy away from tough issues.

We’re back to Las Encinas for another school year and this time, we got three new characters: Cayetana, Rebecca, and Valerio. Valerio is honestly my favorite as he was the most chaotic, but also has the best character development in the end. Cayetana is my least favorite.

Back to the old cast, they were still trying to solve the murder mystery and handling whatever going on with their lives. Samuel is trying to seduce Carla, Polo is feeling more lonely than ever. Guzman is not handling his emotions well, being self-destructive and worrying Lu and Nadia. Ander and Omar relationship are getting more serious but so are the consequences and compromise they have to reach. I still love the characters and the plot attached to them, but I think they did Nadia dirty. She was so wishy-washy throughout the whole time and continue her ‘holier than thou’ act. The latter might be because how she was raised, but it was still not an enjoyable thing to watch, especially since I always root for her.

I also found the storytelling methods tedious. While in the first season we got a lot of parties but also dialogue and small acts of defiance, this season utilizes parties as plot setting and it’s getting boring real quick. It’s exciting to see where the next season would go next considering that ending. I’m a bit disappointed with this season but excited to see where will it go next!

I really enjoyed the first movie so I just watched this when it was on the TV. I don’t know whether it was because I didn’t really pay attention or it just didn’t live up to my expectations, but I did not enjoyed it.

I feel like it kinda lost its magic to me? Sure the animation is still as gorgeous and vibrant as the first one, but it just doesn’t have the same magic. Furthermore, the relationship between Ralph and Vanellope is uncomfortable for me to watch

I know it’s just fiction and that’s kinda part of the story, but still. I like the fact that it was set in motion due to people’s conversion to internet though, it felt like looking at technological advancement through other lens.

This is going to be very short. I’m really taking my time with this show because each episode is just so short and they always make me laugh- and I always need a mood booster! I found myself a tad disappointed though, it’s just not as funny as the first season and while it also discussed important issues, it’s not as often as the first season. It’s just weird finding myself skip some parts because it didn’t capture my attention

Another short review! I remember the buzz before this movie’s release, saying it was really scary and worth the watch. Unfortunately, I didn’t like this story at all. It wasn’t scary or atmospheric, in fact I found the narrative really dull

You know I love James McAvoy so this movie has been on my list for a long time. And this movie is another proof of McAvoy acting ability! I don’t know how he could blend into the characters seamlessly while clearly differentiating between the personalities. It’s also pretty suspenseful in a sense that we didn’t know what the actual motives are or whether the personalities are good or bad.

After a string of failures, we got the winner of September 2019! I love the trailer and been wanting to watch this movie, but I didn’t get to see it when it was in theater (will probably get censored a lot too, tbh). I finally watched it together with my family when it was on TV and it was the best!! The humor can be very crass at times, but overall we had a really good time watching the movie together! The plot is pretty predictable, it’s basically all cop-comedy movie. However, the chemistry between the lead is just really good and I love the mystery about who’s the big boss is.

I’m really in the mood for some crime drama and I’ve heard all the rave about Mindhunter, so I decided to check it out. I would say that it didn’t really live up to my expectations, but it also really pulled me in. The vibe is just really dark and I don’t really understand the purpose of including Holden’s personal lives, as it adds nothing to the narrative. The pacing is also really slow and even when they’re on a case, it’s more of thinking rather than actually being on the field.

I found the interviews really intriguing though; I feel like I learned a lot about how people think! Not only from the criminals, sure it’s morbidly fascinating learning about their triggers, backstory, and state of mind. But we also learned from Holden and Tench, from the way they handle and adapt with different situations during the interview. And Dr. Carr- she’s just awesome! We can see how inquisitive and passionate she is with the project and how quick her mind got the information from the interviews. I just felt like all these elements are not tied really well that it felt really scattered.

Can we talk about Jonathan Groff’s voice though??? It’s just beautiful and calming, I’m surprised there’s no riot for him to narrate more movies and audiobooks.

Pirates of the Caribbean: Curse of the Black Pearl

I’m also in a need for some comfort so I decided to re-watch PotC! It’s been really long since I watched the movies that I actually forgot about most of the plot and dialogues. So it definitely felt like I was watching it for the first time, and I get why people (myself included) fell with the trilogy!

The original trilogy is just perfect, it blends humor, charm, wits, action, gorgeous costume, and intriguing plot seamlessly. In CotBP, the mystery was unfolded in a consistent pacing that gives us enough details without guessing or losing interest. I realized that Jack Sparrow is much more than a witty, sneaky guy; he has a debt to settle but he will still get back to save both Will and Elizabeth. Will is more than a love interest; he’s torn between his duty and love yes, but also coming to terms with his father’s legacy and what does this mean for him. Elizabeth is by no means a damsel in distress– she’s brave, quick-thinking, and able to solve problems better than anyone in the movie! And Norrington- he’s actually very nice??? Like when I was a kid I dislike him because he stood between Will and Elizabeth and caused all the events in movie 2 and 3. Yet in this rewatch, I notice that he didn’t stand between Will and Elizabeth. He cared so much for Elizabeth that he let her chooses and respect that choice, even though it humiliates him personally and professionally.

And all the sailing, endless blue ocean, and white sand beaches really makes me wished for a tropical getaway! It’s just so gorgeous. And that ending kiss???? My 7 year old self is back with a vengeance and ship them really hard! It’s really nice to see how much I still love the characters as well as their stories, even after all this time.

What have you been watching in September?

5 thoughts on “Screen Rambles September 2019 // Lots of disappointments, but also some fun!”