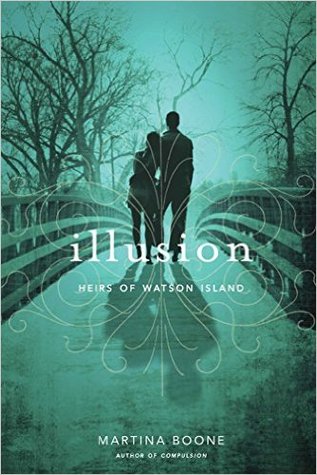 Caged by secrets all around her and haunted by mistakes that have estranged her from Eight Beaufort, Barrie Watson is desperate to break the curse that puts her family in danger — without breaking the beautiful magic that protects Watson’s Landing. To do that, she must heal the rifts that have split the families of the island apart for three hundred years, unravel the mystery of the Fire Carrier and the spirits he guards, and take control of forces so deadly and awe-inspiring they threaten to overwhelm her.

With the spirits that cursed Watson Island centuries ago awake and more dangerous than ever, she finds an unlikely ally in the haunting and enigmatic Obadiah, whose motivations and power she still can’t read — or trust. His help comes at a price, however, plunging Barrie into a deadly maze of magic and wonder, mystery and intrigue that leads through history to places she never imagined she could go.

As with Persuasion, Illusion starts immediately after the events in the previous books. Our characters uncovered another terrible secrets of the past and let the spirits involved to rest. Yet, they still failed to remove the curse and the binding for all three families and the stakes are now even higher as they’ve awaken the angry spirits that put the Colesworth’s curse in the first place.

I love Watson Island. I might not click with all the characters, but I love the landscape and setting and the feeling of the island as a whole. The seclusion from nearby city felt refreshing- it doesn’t mean they’re not up to date with technologies, but it’s refreshing to not see them everywhere. Stories that are set in the present day, even in small towns, tend to have technology mentioned/appear everywhere. Here, everything is more subtle as the stories itself focused on magic and the past. Sure, there are a lot of terrible secrets lurking left and right, done by the mistakes of their ancestors. And some of the mistakes are still creating echoes at the present. But the island has this trapped in the past kind of feeling, of swooping plantations and columns, rivers and swamp. Barrie’s sense of wonder also probably helps, it really translates on the pages and in turn, make us really appreciate the island.

Unfortunately, that’s the only thing I’m 100% have positive feelings for. The rest of the elements are very mixed, in my opinions. For starters, there are so many things going on in the past that Barrie has tried to uncover, and everything seems to collide head on in this book. Curses, slavery, and revenge, bindings and colonization, ley lines and alternate universe… Not to mention each character journey of reconciliation with their past: Pru and Seven, Obadiah, and Barrie herself. They are certainly interesting, but I find myself really confused to keep up with the threads of the story as there are a lot of subplots to keep track of. I wish one of the main problems was at least tackled in the previous book so this one is not as confusing.

I also find myself really annoyed with Barrie. In the first book, she was sheltered and know nothing about the Island, and yet she thinks she knows everything already. She ignores everyone’s advice and thinks herself about prejudice, which understandable as she wants to have an extended family. She certainly learn the lesson and took up more responsibility in the second book, taking her time to learning the founders history, the atrocities committed that still echoes to the present time. But she’s back to being infuriating and selfish in this book. She still took the lead and responsibility, but everything always come back to her and her problems: how to keep her gift, how to also get back together with eight, how to reconcile with Lula’s ghost, etc. She also relies a lot on gut feeling; she thinks her gift is to protect the Watson landing, there’s something the fire carrier wants her to do, that the Watson gift is there for bigger purpose, etc. Which did turned out well, but in the process she would readily took Beaufort’s gift and more from others because she thinks the Watson gift is meant to do “more”. She can justify it by protecting her “family” to Cassie, but in the end in her inner monologue she always thinks along the line of “what if the gift is meant for more?“. Which in itself a testament of her selfishness as she did think the Watson is better and more important.

It’s not all bad though, as I really enjoyed other side characters! Pru and Mary will always have a special place in my heart, fierce women that still hold so much femininity instead of written as brash, brazen, or outspoken. They still held out on their own. Eight is not perfect, but he might as well be. Seven, not so much fondness but I love his moments with Pru. Cassie is also in a no-love zone; sure my heart went out for her for what she went through but her behavior afterward is still not excusable. How Berg fell for her is questionable. And we also got more insight on Obadiah! Still conflicted on him, as he still felt like evil even though he obviously isn’t, but I do wish he found his peace in the end.

The last thing is the writing style, which somehow felt really descriptive and preachy in this book. I usually don’t mind the amount of description as I love the setting, but on top of the too-much-to-follow plot, it really muddles my brain. And there are so many monologues that felt like explicit teaching moments. Like we were talking about finding something about the founders, and then there were 2 paragraphs about how finding the truth can lift a lot of prejudice and there are a lot of things you can’t overlook etc etc. The author mentioned about her core themes of the series in her author’s notes, which are about acknowledging the past and finding connections, as well as a lot of references and facts she used. But that doesn’t mean I like being lectured every other pages.

As the final book to the Heirs of Watson Island trilogy, I find Illusion to be a bittersweet ending. I still love the setting and the magic surrounding it, but the plot felt convoluted. I fell in love and gained more understanding on the history as well as some characters, but also fell out of love for our main character. And the writing felt really descriptive and lecturing, which gives the book the extra length compared to other books in the series. It was imperfect, but I’m glad for one last chance to return to the Watson’s Island, with all its flaws and imperfections.