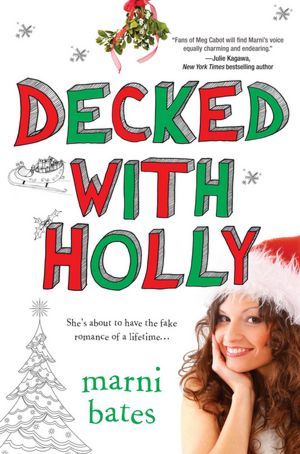 Smartly blending of-the-moment pop culture references and timeless themes, Bates follows her YA debut, “Awkward”, with a hilarious, over-the-top adventure about a teen girl who becomes the fake girlfriend of a cute rock star.

Taking a Christmas cruise with her two cousins from hell isn’t Holly’s idea of a good time. And when seasickness forces her into an open suite, she’s pepper-sprayed by a gorgeous guy called Nick. But when Holly makes her exit, she’s greeted by a horde of screaming teenage fans. Because Nick happens to be Dominic Wyatt, drummer for one of the hottest bands in America. Suddenly rumours are swirling and Holly’s face is plastered all over the Internet. The band can’t risk a scandal destroying their family-friendly image, so Dominic convinces Holly to be his fake girlfriend – just for two weeks. How bad could it be to be “fauxmantically” involved with a cute rock star? She’s about to find out…

Decked with Holly wasn’t the holiday read, nor first read of 2020 that I was looking for. While the story set during the holidays, it barely mentions them or incorporate them to the plot. The main character got enough development and the romance is also cute, but the length caused the story to feel really rushed and underdeveloped. It was a short read that was supposed to be super quick, but it ended up taking so long as I can’t get into the story.