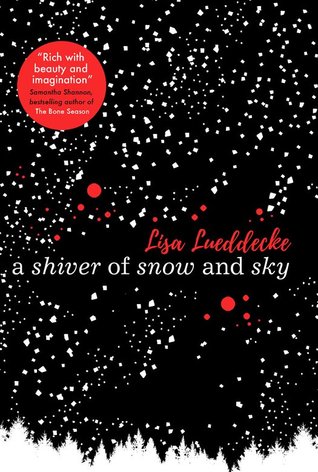 A Shiver of Snow and Sky

Beware the danger up ahead…

On the frozen island of Skane, the sky speaks. Beautiful lights appear on clear nights, and their colours have meaning: Green means all is well, and the Goddess is happy. Blue means a snow storm is on the way.

And then there’s red. Red is rare. A warning.

Seventeen years ago, the sky turned red just as Ósa was born, unleashing a plague that claimed the lives of hundreds of villagers, including her own mother. This time, when the night sky once again bleeds crimson, she must discover how to stop the onslaught before so many lives are lost again.

Wintry settings, isolated island, bad omens, and a quest to speak with higher deity… Sounds perfect right? I had a really high hope for this book as it seems to have all the elements to be a new favorite fantasy book. In the end though, I was left severely disappointed.

My biggest problem with this book is how it never really captures me from the beginning. Yes it started out immediately on the night the lights turned red, but the plot never really picked up for me. Skane is a very isolated island, where the people on it are also separated into several isolated villages that barely interact with each other. The first settles moved there to escape slaughter- as such, the people are very superstitious and easily frightened. Added with the barely-there interaction between the villages, you got this sense of isolation, fear, and helplessness which did not help the atmosphere of the story. I think it’s such a realistic response within such a close-kit and isolated community, but I didn’t enjoyed it. And as there were barely any interaction with the outside world, the story mostly against the backdrop of mundane life and the result, the pacing was really slow and it really did not hold my interest at all.

I really appreciate how even after Osa started her quest, we still got the glimpses of the happenings within the village from Ivan’s pov (Osa’s childhood friend). But the quest itself was not engaging. We were told it was dangerous, foretold and prevented by many people, but Osa herself got through it fairly unscathed. As in, there’s always some convenient way that got her out of her challenges. There are a lot of interesting elements she encountered during her quest, such as the snowpeople, the constellations, the temple, and the Goddess herself. But these elements were never fleshed out or explained; they serve a purpose to expand the world building and gave Osa a challenge, but not too much. This book also incorporates some nordic mythology (the Jot) but if you don’t know it, it won’t mean much as it wasn’t really explained. And yes, it did took me a while to figure out about the Jot. Overall, the world building had a lot of potential, but felt really lukewarm in its development.

The characters may have some interesting backstory, but their characterization didn’t stand out very much from the sea of fantasy protagonists. As a main character, Osa is a likeable one. Despite her given cold shoulder in her house, she truly cares for her family and her village, thus her insistence on going on her dangerous quest. She’s kindhearted, steadfast in her belief, and determined in achieving her goal. The second main character, Ivan, is brave and loyal for his village. He’s also very loyal with Osa, keeping her company, sheltered her when she has nowhere to go, and always believed in her. You might be able to guess where their relationship is going, but I love how it was strictly platonic for 90% of the book.

Filled with all the right elements, A Shiver of Snow and Sky has the potential of being a new favorite fantasy series for me. Unfortunately, the pacing was really slow and the world building, while interesting, wasn’t fleshed out really well. Added in pretty generic characters, this book did not live up to the high expectations placed on it. It wasn’t the best way to started off the year, but at least I got this book off my TBR list.

Have you read A Shiver of Snow and Sky? Do you like wintry-setting books? If you do, please give me some recommendations in the comment below!