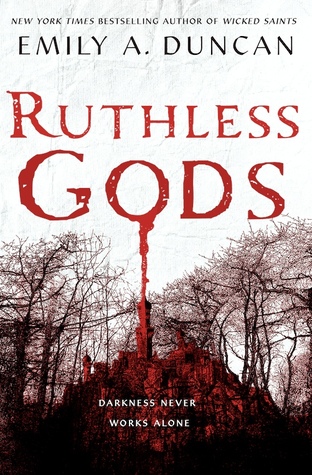 Nadya doesn’t trust her magic anymore. Serefin is fighting off a voice in his head that doesn’t belong to him. Malachiasz is at war with who–and what–he’s become.

As their group is continually torn apart, the girl, the prince, and the monster find their fates irrevocably intertwined. They’re pieces on a board, being orchestrated by someone… or something. The voices that Serefin hears in the darkness, the ones that Nadya believes are her gods, the ones that Malachiasz is desperate to meet—those voices want a stake in the world, and they refuse to stay quiet any longer.

This book is a frustrating but addictive mess.

I have to admit that this book is better than Wicked Saints. I read this book because I love where the story is going, and I did love the plot of this book. It’s not exactly new or unique, but I love how we get to know more on the mythology of the gods and how the questions of divinity are explored. I enjoyed reading about the theologies of Kalyazin, of their pantheon and their beastly figure, of their cold indifference and the rules that bound them. I also love the atmosphere– it is dark and gory, with a lot of blood and bone and darkness present, but also weirdly… sensual. And finally, I admit that I find this book more enjoyable because it departs from the similarities with the Grisha trilogy and started to become a story of its own .

I love the fact that these characters are not easily wooed to the enemy side and still stood for what they believe in and their country, that despite their friendship and romance and allegiance their forged, when the time to choose comes, they will always choose their country. But beside that, the characters are a pile mess.

Honestly, the side characters are more interesting than our main trio. Kacper and Ostiya are finally making their moves (which I love), we got to know more about Rashid and Parijahan (and more about Akola), and we got to know the tsarevna of Kalyazin, Katya. The banter between Serefin, Katya, Ostiya and Kacper as well as Parijahan, Rashid and Malachiasz are honestly my favorite dialogues and dynamics between the characters. Kacper and Parijahan got more development in this book, so I’d love to see more of Ostiya, Katya, and Rashid in the next book!

Another thing I hate about this book is the repetitive writing. You might have notice that Nadya always describe Malachiasz as a “lonely and anxious boy”, but it’s not only her, it’s the other characters. They all describe him with some variation of “— boy”: sad, brilliant, lonely, nervous, anxious… you name it. And this repetition is not something that applies for describing Malachiasz only (Seriously, how many times do you have to use the word “boy” to describe him? Apparently, the word was used 185 times and 133 of them are in reference of Malachiasz). To build the atmosphere and the setting, this book heavily on repetition of words that coveys the idea of the author’s intention, but did not actually specify any details or visuals.

The most obvious example is instead of explaining the exact setting or sensation the characters are experiencing, the author repeatedly used the same words over and over again. “Somewhat” “something” “bone” “more and much more” “stars” and “blood” are some of the favorites, not to mention “eldritch” and “mad” at the second half of the book. Like when describing churches and cathedrals, we just got icons, pews, bone altar covered in blood or bone covering the floor or bone in the structure. But how does the building felt like (except of feeling boly or scary or divine), what’s the color there, etc was not explained. Same with the Salt Mines- is it a cathedral or a mine? It’s conveniently too dark in the hallways of the Salt Mines- except in the room with the bloody altar. There are also many instances when she “suddenly” felt things or being too close or feeling power too powerful or “somehow” know things, but what does that mean?

Another example, we skip a lot of battle scene, especially where magic is concerned. It’s been two books, but I still don’t understand how the magic work. Nadya felt the power rushed through her, but then what? Any light? Color? Explosion? Or does things just happened and people just disappear? Does she control the magic flowing through her, or does she became a puppet and only use the magic as the gods told her how to use it?

The use of the repeated words certainly builds the aesthetic, but as a reader I felt frustrated and confused. I understand that the characters were in the unknown too so maybe it’s intentional, but I couldn’t 100% understand what was happening at all times as the description just felt incomplete. I felt the same thing with the Raven Cycle, but because the writing was whimsical and the plot has so many fine threads. Here, I feel it’s because the author cannot visualize her intention 100% or doesn’t know how to convey it.

Overall, Ruthless Gods is a successful sequel in terms of the plot and expanding its mythology. However, the characters and prose had major setback in terms of enjoyment. I’m still interested with the plot, but the writing and characters are such a struggle, I’m both drawn and repealed by them. I guess we’ll see how long the series will go and how I feel when the next book is released.

15 thoughts on “Ruthless Gods by Emily Duncan // Addictive, but very frustrating to read”