Before we start, I would like to ask you, dear readers, to join the fight and use your voice in fighting inequality and injustice for Black Lives Matter. Here are some resources for you to help: 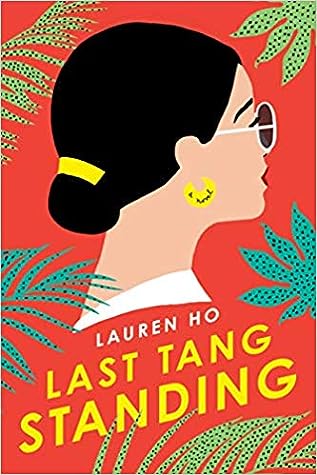 Andrea Tang seems to have it all: an enviable job as a high-profile lawyer at one of Singapore’s most esteemed firms, a swanky apartment, and the best friends a woman could ask for. According to her mother and her Auntie Wei Wei, Tang family matriarch and holder of the purse strings to a sizeable fortune, that leaves just one thing missing: a husband. After all, at thirty-three, she’s not getting any younger. When Andrea discovers that even Auntie Wei Wei’s notoriously unattached daughter has gotten engaged, she realizes she’s become what she fears the most: the Last Tang Standing, lone singleton in a sea of married Tangs.

Andrea might be an independent career woman who doesn’t need a man to buy her the Birkin bags she loves, but she’s also a Chinese daughter who’s keenly aware that nothing in the world can pay off the debt of filial guilt. Luckily, options–and eye candy–abound in her quest to find Mr. Right-for-her-parents. There’s Suresh, her annoyingly attractive rival at the firm. There’s Eric Deng, the older, super-wealthy entrepreneur whose vision for their future entails sacrifices Andrea isn’t sure she’s willing to make. And, of course, there’s Tinder.

In diary entries as rollickingly self-deprecating as they are searingly astute, LAST TANG STANDING follows Andrea through bad dates, questionable decisions, friendship drama, career competition, and intense familial pressure. And it reminds readers that the road to happiness might be unpredictable, but there’s always room to enjoy the ride.

So. Since the book is the one that marketed itself similar to Crazy Rich Asians, I can make comparison, right? 👀

I can totally see the similarities, but in some ways, it’s better. It’s set in Singapore, filled with outrageous, crazy fun narratives and Chinese clans in all their competitive, well-intended, gossiping and meddling glory. As Andrea is a “working class” instead of a super rich/tourist, we are treated with life in Singapore: of brunch and dinners in fancy restaurants but also delis and hawker foods for lunch during weekdays as well as of rush hour chaos in a densely packed MRT (ah, to ride in Bishan during rush hours- the long walk, the sheer number of people in such an enclosed space…). And I admit, I found the narratives have the same outrageous, crazy fun feeling of CRA that made it so easy to read and fun to pass the time.

In other ways, it is worse. I was hoping this book was about Andrea Tang focusing on her career and finding love in serendipitious way, but instead it is her desperate attempt of finding love. Andrea Tang is also an unlikeable character: she is so shallow, constantly judging and condescending someone’s choices whether it’s friends, enemies, or love interests. She’s also can’t see past herself and competitive in a bad way, where everything is a competition for her and so she sees everyone as a threat.

To top it off, the writing has so much exposition and meandering jabs, which is also worse that instead of making good natured jab as in CRA, the comments it made are actually snide and mean. I mean, I love the topic discussed of how filial guilt in Asian culture is not healthy and the racism within the culture disguised as “good advice for a better marriage”. But all of them are discussed in jabs which I don’t like, and as this book is written in a first person pov (Andrea’s diary), this writing reflects her character.

There are other characters within this book, mostly unlikeable but some are better than others. We have Auntie Wei Wei, the richest person in the Tang clan whose daughter Helen is finally getting married and started off this whole quest for The One because Andrea couldn’t stand being beaten by her (or being disinherited by Auntie Wei Wei). We have Andrea’s Ma with whom every conversation filled with agressive line of conversation of “when will I have grandchildren????”. We have her cousin/best friend Linda, also dubbed as La Linda, who’s also in the same quest of finding The One but more alcoholic, self-destructive, shallow, and have a deep purse to cushion her fall (hence the alcoholic and self-desctructive streak). We have Valerie, who Andrea constantly judge as Bride of Chucky due to her constant alterations but honestly, I think she is a better, healthier friend than La Linda. With who she surrounded herself with, it’s no wonder Andrea has a character 😬

And we have the two love interest, Eric and Suresh. I can’t talk too much about them because it will spoil the whole romance, but I feel that Eric is better suited for Andrea as a long term partner. It’s not that Suresh a bad candidate, in fact he’s not, but Eric is more stable and suitable and willing to communicate. Suresh is decent, but I can’t see Andrea and him last tbh 🤷‍♀️ I do think she has a better tension with Suresh, but hey we’re supposed to be looking for a long time partner not a fire that burns bright and doused early right?

If you’re looking for a fast and fun read, The Last Tang Standing is a book you should give a try. But it does have a lot of judging and shaming that despite its intention to be good-natured, felt mean most of the time and a character that doesn’t have the best judgement. I definitely had a fun time and breezed through the book, but I also skimmed a lot of snide and jabs as they tired me after a while.

3 thoughts on “The Last Tang Standing by Lauren Ho”