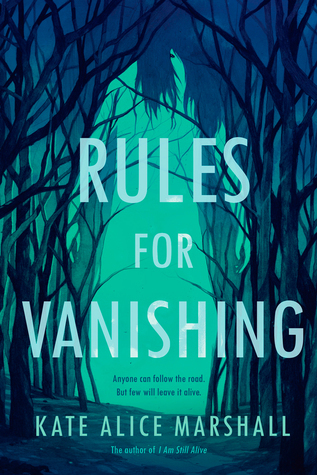 In the faux-documentary style of The Blair Witch Project comes the campfire story of a missing girl, a vengeful ghost, and the girl who is determined to find her sister–at all costs.

Once a year, the path appears in the forest and Lucy Gallows beckons. Who is brave enough to find her–and who won’t make it out of the woods?

It’s been exactly one year since Sara’s sister, Becca, disappeared, and high school life has far from settled back to normal. With her sister gone, Sara doesn’t know whether her former friends no longer like her…or are scared of her, and the days of eating alone at lunch have started to blend together. When a mysterious text message invites Sara and her estranged friends to “play the game” and find local ghost legend Lucy Gallows, Sara is sure this is the only way to find Becca–before she’s lost forever. And even though she’s hardly spoken with them for a year, Sara finds herself deep in the darkness of the forest, her friends–and their cameras–following her down the path. Together, they will have to draw on all of their strengths to survive. The road is rarely forgiving, and no one will be the same on the other side.

I would say that I’m not someone who’s easily scared, so it takes a lot for me to get scared, but this book NAILED IT.

This book use mixed-media method to tell its story: we got written testimonials, footage from within the road, text messages, and footage from interview with the survivors. It goes back and forth between the now of interview and the then of being on the road, and I think it works really well in building the atmosphere and the creepiness of the whole situation.

“Do you want to know where Lucy went?

She went to play the game.

You can play, too.

You have two days.”

It all started with a text about the road and the legend of Lucy Gallows, sent to the whole school on the near-anniversary of Becca’s disappearance. We had 9 teenagers going into the wood, not believing any of the legends are real. But the road did appeared, all of them walked the road and only 4 survived.

So let’s talk about the horror aspect first, because that’s what drew me into reading this book. The author has done a terrifyingly amazing job in crafting the legend and building up the atmosphere. This book has this ominous atmosphere from the beginning, even way before they went on the road, that keeps building up as the story goes and just doesn’t let go. The road is just so scary, you never know what will appear, what will happen, and how it will try to trick you next. I read this in broad daylight but it still scared the living hell out of me. Other than the footage (which for once, apparently captured all the supernatural happenings), the interview transcript adds to the dark atmosphere because you just know something is wrong, you just don’t know what yet.

Unfortunately, it gets too long after the halfway point. After the mansion, I feel like there were too much death and shock; our character (and me tbh) may have reached their limit and it kinda showed? The tension just fizzled out after that point and the book never really got it back again. I would say the lighthouse was quite creepy and the ending too, but it never reached the level that was present in the first part of the book. After the mansion, the other gates on the road and the overall concept felt like we are in a board game or something. Like a deadlier, cursed version of Jumanji.

There are 9 teens that went on the road: Sara, who is our main character that determined to walk the road and find her sister Becca. Anthony, Trina, Nick, Mel, and Kyle, Becca and Sara’s estranged childhood friend. Jeremy (Anthony’s partner), Miranda (Mel’s partner) and Vanessa (Nick’s partner). Sara is our main character, the whole book is based from her desire to look for Becca and her interviews. But we also know early on that she’s an unreliable narrator from the evasive, distracted way she recounted the experience. Other than Sara, the character that stood out the most is Jeremy because I liked him the most. He was no one’s friends (except for Anthony), but he’s the rational one who continuously questions everything and the first one who risk their limb to save others (grabbing Kyle in the village, grab the messenger bag, grab Zoe, run to Kyle in the mansion, saving Sara in the mansion). He’s certainly the bravest of the bunch. As for representation, Becca is asian, Jeremy is deaf, and we got f/f romance.

I think the plot is interesting, we know that the road is real and as we go on, we discovered that it is full of horrors and even after you left the road, you might not as safe as you thought you are. But that is not all, as you read, you discovered that nothing is at it seems– I can’t tell you because it will spoil the book but I quite enjoyed the secondary plots too. I just feel like the secondary ones are unnecessary because they are not explained well and I hate the conclusion for both because a) at that point the book already lost quite a steam and b) I don’t like open endings in general.

Overall, Rules of Vanishing is one of the best horror I’ve read. Sure, after the halfway point I kinda lost interest in the story, but it doesn’t erase the fact that for the first half, it terrifies me. The atmosphere is one of the best for horror, it didn’t pull any punches on characters death or the challenges they faced, and the stakes are really really high. The plot is also super interesting and full of twists. I highly recommend this if you are looking for a YA horror to read!