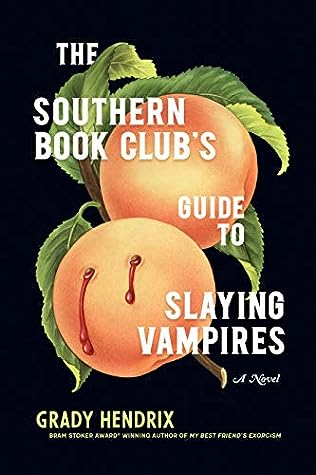 Fried Green Tomatoes and “Steel Magnolias” meet Dracula in this Southern-flavored supernatural thriller set in the ’90s about a women’s book club that must protect its suburban community from a mysterious and handsome stranger who turns out to be a blood-sucking fiend.

Patricia Campbell had always planned for a big life, but after giving up her career as a nurse to marry an ambitious doctor and become a mother, Patricia’s life has never felt smaller. The days are long, her kids are ungrateful, her husband is distant, and her to-do list is never really done. The one thing she has to look forward to is her book club, a group of Charleston mothers united only by their love for true-crime and suspenseful fiction. In these meetings, they’re more likely to discuss the FBI’s recent siege of Waco as much as the ups and downs of marriage and motherhood.

But when an artistic and sensitive stranger moves into the neighborhood, the book club’s meetings turn into speculation about the newcomer. Patricia is initially attracted to him, but when some local children go missing, she starts to suspect the newcomer is involved. She begins her own investigation, assuming that he’s a Jeffrey Dahmer or Ted Bundy. What she uncovers is far more terrifying, and soon she—and her book club—are the only people standing between the monster they’ve invited into their homes and their unsuspecting community.

I received an eARC through Edelweiss Plus in exchange for an honest review.

“We’re a book club,” Maryellen said. “What are we supposed to do? Read him to death? Use strong language?”

This book is such a roller coaster ride in terms of pacing and emotions. Set in the suburbs of Charleston in the 90s, the first 25% of the story deals with the lives of prim and proper” local housewives, who cook and clean and carpool and agree with whatever their husband said. The only respite they have is by created a non-bookclub bookclub, where they escaped from their routine to read about murders and serial killer. It seems harmless at first, really, but things about to get really interesting when mysterious stranger arrives. The rest of the book build the tension slowly, using the sexism and racism at that time to confuse our main characters on whether the newcomer truly meant harm to the community or is it only in their overactive imagination, before it finally came to head in a great display of bravery and solidarity within the wives.

The suburbia setting work really well, it rooted the story in a mundane element of routines and manicured lawns and teenage rebellion while letting you know something wicked is afoot. The 90s setting allowed social commentary on sexism and racism at that time, of how being a woman and a wife means you’re giving up your life and individuality for your family, having to clean and trapped in the house for your whole lives. Of how being Black means being ignored, no one cared about taking your land and the noise of construction and your missing children and how easily it could be pinned on you. Of how being a wife and/or black means you’ll always struggle to be taken seriously, without being belittled as confused or uneducated or hysterical.

“Why do you pretend what we do is nothing?” she asked. “Every day, all the chaos and messiness of life happens and every day we clean it all up. Without us, they would just wallow in filth and disorder and nothing of any consequence would ever get done. Who taught you to sneer at that? I’ll tell you who. Someone who took their mother for granted.”

If you’re looking for a lot of vampire you’ll be disappointed though, because this book reads like a homage to motherhood, an ode to mothers and housewives who are often underestimated and overlooked. In the introduction of the book, Hendrix wrote about his experience growing up, of how he didn’t take his mom seriously because “she was a housewife who was in a book club, and she and her friends always running errands, and driving car pool, and forcing us to follow rules that didn’t make sense” and how he appreciate her more now, understanding that there are more things the adult are dealing and protecting us from so we could have our childhood. This really rings true in this book with how many times the main characters said/thrown “I’m/You’re a housewife, what else will I/you be doing?” and constantly being underappreciated, yet still do their best to love and protect their children. A mother instinct will always to protect children which rings true in this book: no matter how tired they are, how ungrateful their family are, how much they hate their lives and routine, they will always try to protect children, theirs or others (even if they have to come back from Hell). In this book, it’s from literal vampire, yes, but also from more mundane things such as fights between parents, growing up, bullies, etc.

There are 6 center characters in this book. We have Patricia, our main character, who’s trying really hard to appease her husband and children, being the perfect neighbor, and whose compassion initiates the whole event. We have other members of the book club: Kitty, who is fun and quirky; Slick, who is very religious; Grace, who is very prim and proper, but the best at organization and cleaning; Maryellen, arguably the least developed; and finally, Mrs. Greene, fierce and loving and takes no shit from anyone, not even count dracula himself. The bookclub meetings became a place of laughters and female friendships and discussion of serial killers, but also a discussion on their lives. All of them came from different backgrounds and have different opinions on their lives, but in the end they are all loving and brave and would do anything for her children. The story almost fell into the white saviour trope as Patricia is white and it all started with her investigating and helping the cases of disappearing Black children, but it was turned on its head in the end with how Mrs. Greene took charge and became the rock of the whole operation.

Grady Hendrix is quickly climbing the list of my favorite authors; his books are not always a hit for me (2/3 is a good number though), but they always have a unique concept, great build up, and some sort of normalcy in the midst of crazy horror threat. Southern Book Club is not different, it has the perfect balance of mundane and ~supernatural~, female friendships and laughters, but also not afraid to get into dark moments. It is also very well written, the story flows really well and it’s just easy to get hooked. It’s a perfect summer read and I can’t wait to read whatever he came up with next!