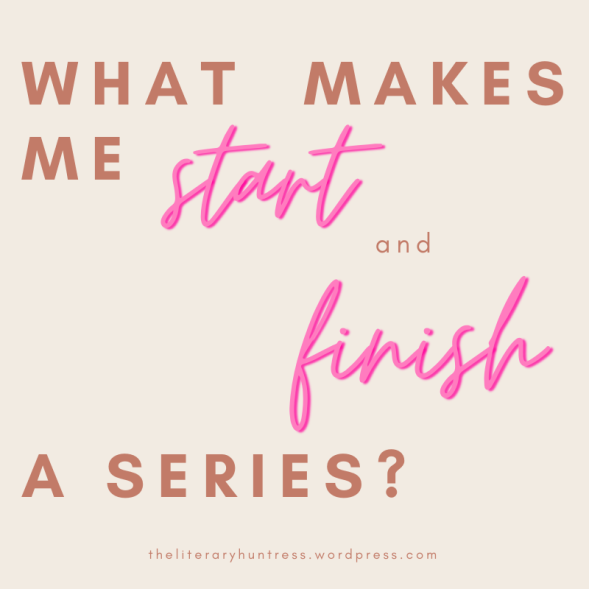 There will always a debate between series vs standalones, and while I love a quick read, I also love reading a series.

Sure, I suck at finishing them; at this point, it feels like a life-long quest to finish some of my oldest series. But series gives the space for authors to develop the story, characters, and world building. As a reader, series allowed us to build a deeper connection with the characters and their motivations, which is why most of my favorite characters tend to came from series instead of standalones.

I often wonder what makes me, you, us picking up a series and committed with it until the end. Is it the synopsis? Is it the characters? What makes us loved it so much that we’re willing to wait for years for sequels, eagerly waiting to return to the world? What makes some series very famous and beloved, while others with same premise fell into obscurity? So today I’m going to try to explain what makes me pick up a series and commit to it. Without further ado, let’s get into the topic.

📚 Related post: 5 Elements that Determines How I Review and Rate My Books

What makes me decide to pick up a series? First and foremost, is the cover.

Yep, you got that right. It’s the cover. After all, it’s the first thing we literally see when we discover new books. And on that cover, we got gorgeous illustrations yes, but also title and the author’s name.

I find that author’s name doesn’t really influence my decision. I can say Rick Riordan is my auto-read author, but I’ve been skipping some of his books too. I can say I love Katherine Arden, but I haven’t read all of her books either. So really, while authors do matter, it’s not as much as I thought.

I would say that titles actually have more weight in my decision because it can tell you the genre the series will be and what the story is about. If you have buzzwords of queen, storm, starlight, blood, and ashes, or follow the format of “X of Y and Z“, it’s 90% guaranteed that the series will be a fantasy. And in general, I tend to commit more on fantasy series rather than contemporary, so it already gives me a strong reason to check it out.

I don’t have to mention that cover visuals matters because that’s a given, but I want to mention book summary. Specifically the ones at the back of the book. I hate it when the summary gives too much away, but I hate it more when the summary barely gives anything and instead filled with reviews from other authors/reviewers 😬 I wouldn’t drop the book per se, but I will most likely be setting it aside for latter.

First book, aka a series opener, is a very VERY important book. It’s what will make or break your series, the book that will pull the readers in and make them read the next books. For me personally, writing, characters, and plot are really important for me and as such, is something that really affected my decision whether to continue the series or not. Even if the concept of the series is something that’s been done 1000x times, fulfilling one of those “big three” is such a sure way for me to commit to a series.

It could be the writing, such as in THE BEAR AND THE NIGHTINGALE, DAUGHTER OF SMOKE AND BONE, THE WRATH AND THE DAWN and THE RAVEN CYCLE. The writing in those books are just so beautiful, it really immersed me into the world building and explored the depth of the characters feelings that it’s easy to empathize with them. It could be the plot, as with SPLINTERED and REBEL BELLE, which has such a unique concept and the direction of the plot keeps me reading the next books in the series. Or, it could be the characters, such as in CLOCKWORK ANGEL, LEGEND, and VICIOUS who just worm their ways into my heart and made me care so much for them.

Middle books are arguably the hardest to write, as several authors testified, and as the result, can be the hardest to read too. I can’t tell you how many times I’ve read acknowledgement page and see the authors admitting struggle with second books. If it’s a duology, you have to create a satisfying conclusion that lives up to the first book. If it’s a trilogy or more, you have to make sure the book does not fall into the trap of middle book syndrome. More often than not, middle books do fall to this trap though and it’s usually because they are used to set up the final confrontation, so there are a lot of build up that can feel like:

For me, what usually made middle books work for me is that if they have a specific problem to address. Not only the “how are we going to defeat the bad guy” or “will they end up together” problem that is going to be addressed in the final book, but more of individual problems . For example, in Percy Jackson and Harry Potter, each middle books deal with different mystery/quest to solve that does have a connection with the final confrontation, but still provide enough enjoyment to stand on its own instead of serving as a “filler”. Same with P.S I STILL LOVE YOU, where Lara Jean has to deal with the return of John Ambrose and matchmaking her dad. These side plots keep things interesting and keep building the story to its final arc by developing the characters and expanding the world.

For me, final book is less important compared to first book as by this point, you already got readers hooked to your stories. But it is a VERY important book as it’s the conclusion of the series and well, people just have expectations. Not only in terms of plot, people usually judge the final books based on how much character development the characters have gone through or even how much the author has grown as a writer. I don’t usually judge the authors, but I do want to see some character development.

Of course, all of them usually focused on the climax and resolution of the story, but there are different ways to finish a series with a bang for me. You can make it focused solely on the final battle, starting at the moment right before the battle and finish with a little happy epilogue such as in THE LAST OLYMPIAN and GODDESS. Making the story about a life and death of a certain characters also often works, such as in CHAMPION, LADY RENEGADES, and of course CLOCKWORK PRINCESS. Don’t forget to add some characters death or leaving to add to the bittersweetness of the story 🥺

The final book, for me, is what will make the series earn a “favorite” title from me. I could feel meh about the first and middle books, but then the final book just blown me away and it became a favorite of mine because it just show the series just keep getting better and better- something I always love (hello, A CONJURING OF LIGHT). Bad series finale can REALLY ruin the series for me– case in point of ALLEGIANT despite the fact I think DIVERGENT is one of the best series openers. Often times, the final book just fell in the middle: it is average and not disappointing, but not mindblowing either. Sometimes it’s okay though as they made me want to revisit the world and characters and while it doesn’t make the series a favorite of mine, it made me realized how much I enjoyed being in the world and reading about the characters.

What makes YOU want to read a series and finish it?

Please check out https://bringjustice.carrd.co/ to find out about what’s happening in the world and ways you can help.

18 thoughts on “What Makes Me Read and Finish a Series?”